The scene: Team Fortress 2's Badwater Basin map. It's a full server, and the cart is just inches away from the second capture point. I'm the Blu team's only Spy, and I'm cleaning up. Medics, Heavies and the odd Sniper - I'm taking them all out and walking away, re-cloaking and repositioning for another strike. And then, from my vantage point on the rooftop overlooking the cart, I see her. The Pyro.

Heavies and sentry guns are easy pickings, but the Pyro is the ultimate prize. She can spam flames all day long, and one touch will blow my cover. Buoyed by my successes so far, I go in for the kill anyway. I get lucky - she's distracted by my team's umpteenth ÜberCharge push of the day. With a grin, I glide around the corner and unleash a nasty backstab. Suddenly, I hear a frustrated cry from the next room and the words every boyfriend dreads hearing: "No more sex for you!"

I sigh, happily. I love that Pyro.

Girls don't play games, and neither do adults. At least that's what I believed growing up, informed in part by the infamous stereotype of the gamer. You know the one - the young, pale, typically prepubescent male sitting in his room all day because he has more games than friends. But even as these negative associations about videogames took root, I found myself increasingly drawn to gaming. It became one of the richest and most pleasurable areas of my life, but I was afraid to talk about it because I thought it had some kind of weird stigma attached to it.

So when I "discovered" girls and started to form proper romantic relationships, I inevitably found myself saddled with a self-imposed handicap. Whenever you enter into a relationship with someone, there's always that little voice inside you that says "Relax. You're great, just be yourself". But no one in their right mind takes this advice to heart - at least not right away.

We all have parts of ourselves that embarrass us or make us feel self-conscious. Instead of letting it all hang out, you try to present the best of yourself - the last thing you want is for your partner to get a glimpse of your stranger or less attractive aspects and lose interest. That was what gaming was for me: something private, not to be discussed for fear it would ruin my chances of being taken seriously by the opposite sex. In a way, it was crippling - until I realized that it's only through the sharing of experience that we grow closer to other people. 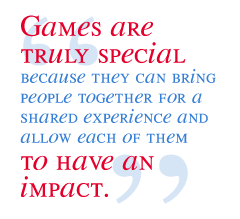 I've come to appreciate being able to share my love of gaming more than I can put into words. Out of all the entertainment mediums, games are truly special because they can bring people together for a shared experience and allow each of them to have an impact. Co-operative play, for instance, has become an absolute must for many new titles, and with good reason: It's often the most fun way to play the game. With online multiplayer titles like TF2, you're pushed into co-operative relationships from the get-go, and it's within the plans, pratfalls and rivalries of these spontaneous relationships that TF2 mines most of its humor and its thrills.