His story made the rounds a while back: Kid loves Sonic the Hedgehog. Kid wants his own hedgehog. Since they're illegal in Lawrence, Kansas, kid spends three years of his young life rallying to legalize hedgehogs so he could have his very own Sonic.

Fandom is weird. Sure, it's kind of cool sometimes to see grown adults put aside their Serious Business and cosplay as Mega Man every now and then, and I'd be lying if I said I wasn't pleasantly surprised to find a few classic Star Wars collectibles sitting around the apartments of a few friends of mine. (One had a bust of a TIE fighter pilot mask and a Darth Vader Mr. Potato Head, the other had models of the Lambda Shuttle and the Assault Gunboat.) At a certain point, however, things go too far, and I'm pretty sure that point is well before "I WANT HIM TO VOMIT IN MY MOUTH." 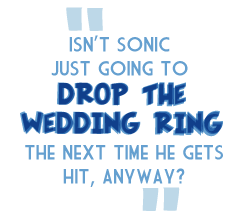 It is ridiculous, of course. As a community of people who play videogames, we can sit around all day and question the sanity of someone who would marry a videogame character. (Isn't Sonic just going to drop the wedding ring the next time he gets hit, anyway?) But why don't we ask ourselves why this happens with videogames? To be sure, there are a number of factors that draw people to the distasteful outskirts of gaming fandom that we as a community could never hope to change - family abuse, developmental disorders, social trauma, etc. But there has to be more we can take from these stories than schadenfreude-driven delight. After all, they're gamers too, and it couldn't hurt to offer a hand of fraternal compassion - even if it's partly motivated by the desire to stop Normal People from associating them with the hobby at large.

Another story I stumbled across of fandom gone wrong is commonly referred to by several Internet communities as the "FF7 House." The saga is fully detailed here by a former resident of the house in hopes that no one else gets sucked into the drama and abuse, so I'll stick to the Cliff's Notes version.