The story starts with an innocent, if slightly eccentric, Final Fantasy 7 fangirl who, during lulls in freshman-year drinking, maintains a fan shrine for FF7 characters Cloud and Zack. Amid the daily duties of administering to Cloud and Zack fandom, she's contacted by a supposed husband and wife couple who run a similar fan shrine for FF7's Professor Hojo. After a series of online exchanges, they convince her that she is, in fact, the real-world reincarnation of Zack, and she has finally found her fellow FF7 reincarnates ("soulbonds") of Professor Hojo and Jenova. Then the "husband and wife" couple of Hojo and Jenova (who were actual lesbians) invite her to live with them for summer break. 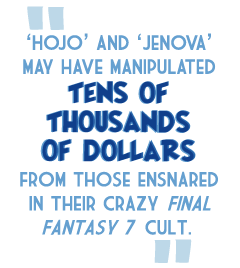 From there, you can of course see how the situation would devolve into LARP magic fights, emotional abuse, very real fights followed by very real lesbian sex, suicide attempts, starvation and incredible financial drain. Supplementary accounts provided by others indicate that "Hojo" and "Jenova" may have manipulated tens of thousands of dollars in living expenses, gifts, etc. from those ensnared in their crazy Final Fantasy 7 cult. The Internet is serious business indeed.

Interestingly enough, one of the characters associated with the FF7 House (known only as "Aeris") later became the subject of another roommate horror story. The tale was initially related by Pete, a retail manager by day and furry porn/hentai artist by night who posted his saga to a LiveJournal community called Housemate Horror. (Yes, this tale of game fandom gone awry was enough to weird out a guy who draws anthropomorphic animal characters having sex with each other.) While the original story has been taken down, the SomethingAwful Goons managed to save most of it here (scroll down to find working links).

This setting is a communal living situation in Southern California when a bunch of working professionals in their late 20s realize they need to find a new roommate after losing one to marriage. After an apparently rigorous screening process (over 500 inquiries, 150 applications and 17 interviews - did I mention rent was $500 a month including utilities?) they ended up with "Sarah," a 27-year-old programmer whose only real blips seemed to be a boyfriend (who was out of town) and a few legal name changes. Naturally, it wasn't until after she started getting a little weird that they discovered she a) was actually the head of a cult that believes they are reincarnations of characters from Suikoden, b) funded her living expenses by extracting donations from said cult members, and c) had legally changed her name to match that of her "soulbonded" character. That's a twist you won't find on The Real World. Highlights include: Sarah Gets A Job, Meet Sarah's Boyfriend, and Sarah's Suikoden Cultmates Come To Play.