My name is Darren, and I'm a warezaholic.

It started innocently enough. My first forays into the illicit world of copyright theft typically involved a blank cassette, a twin-deck cassette player and a game I borrowed from a friend. I had heard about the ease with which you could duplicate Commodore 64 games, but I apparently lacked the skills and understanding to do so. My collection of blank tapes was a catalogue of white noise. All of them failed to load.

Subsequent attempts fared better. By the time I hit my teens, I owned an Atari ST and made the acquaintance of some of the older boys on the bus to school by lending them my gaming mags for the journey. They repaid the favor with a duplicated copy of Rick Dangerous 2.

These were harmless diversions compared to my assortment of legally purchased games, however. I had amassed a collection unrivalled within my social circles. (Hindsight leads me to believe that it was also unenvied, but such is the wisdom that comes with age.) At the time, every penny I earned either went toward the purchase of videogames or toward public transportation to the places that sold them.

This pattern continued until I reached my early 20s. I begged, borrowed and was tempted to steal in order to get my fix of undoing the shrink wrap on a new purchase. The teasing resistance of the cardboard box as I tried to open it, the first flick through the manual, the fresh scent of processed paper - I needed to own games more than I needed to play them. 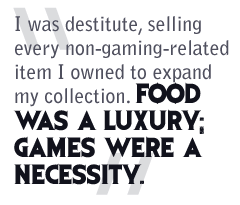 In the '90s, I completed the bare minimum of games - typically only those that turned up in the "best of" lists of each format. But behind each completion lay a fortune's worth of unloved games. I was destitute, selling every non-gaming-related item I owned to expand my collection. Food was a luxury; games were a necessity. My financial situation ebbed and flowed in sync with console development cycles.

And then a mysterious disc entered my life. I loaded it into my PC and up came an animated menu with a list of recent games. Five minutes later I was playing a rip, a pirated copy of a game with all the unnecessary movies and files removed so it could be readily distributed across hijacked web-enabled servers. A local group had gone to the trouble of downloading a few games, burning them onto a single CD with a menu and then putting it out through various channels. According to the numbering on the disc, this was the 47th time they'd done this.