Guys, I know I wasn't supposed to start any more threads about this, but this is important. I'm risking my posting privileges, because I'll never hide behind an alt to make my feelings known.

I just found out my personal "Most Anticipated Game of March 2009" is going to have phone-home DRM, which is a Judas-like betrayal of the fan community. I came here as soon as I found out, because I know a lot of you are interested in this game and I thought you should know that it's been ruined.

By the way, I'll thank the mods not to lock this thread like they've locked all the others. I know that some people around here seem to think the First Amendment doesn't mean anything, but this is still America and the internet. 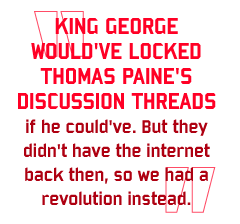 So before you brandish your banhammers, ponder this: King George would've locked Thomas Paine's discussion threads if he could've. But they didn't have the internet back then, so we had a revolution instead. That's why it is so important to write, as he did and I am, about the struggle for freedom from tyranny.

Yes, DRM is tyranny. I'm sick and tired of people coming into these discussions and being like, "Dude, WTF? Who cares about DRM? We're here to talk about games!" Slaveowners were probably sick of hearing Abraham Lincoln talk about slavery. Would you guys have trolled his boards, too? I'll bet you would've. Fascists.

For those of you capable of independent thought, let me explain this DRM scheme that is being foisted on an unsuspecting public. Every two weeks, a program that is installed alongside the game, totally without your permission, will contact an outside server to authenticate the installation.

Did you hear that? A program you don't control is talking to another computer. I feel violated just thinking about it. We don't know what kind of information it's sending. It might be cataloging stuff you've got on your hard drive and sending data about that. Or maybe your browsing habits. Or your search history. This stuff may not even be anonymous. We don't know.

What if one day you end up being prosecuted for something that someone else put on your machine, just because one of these programs spots it and raises a red flag? I've known people who are in jail because of DRM. Well, I've heard from people I trust that they know people this has happened to.