You know what? I feel for the log-cabin PC gamers. The people who live in places where maybe they don't have internet, but they have a Wal-Mart and they bring home a game they're really excited about, and it doesn't work because money-grubbing corporate bastards are so worried about piracy they've forgotten about the little guy.

What is absurd about this entire situation is that DRM is the only reason why there's so much piracy! Everyone I know who pirates games does so because they want to play the games, but don't want privacy-invading, data-stealing, system-resource hogging, malware DRM applications on their hard drive. 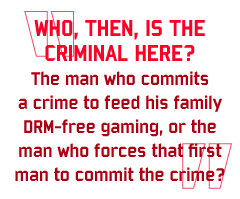 Who, then, is the criminal here? The man who commits a crime to feed his family DRM-free gaming, or the man who forces that first man to commit the crime?

The second man, that's who. The crime-forcing man is the true criminal.

And don't anybody try to tell me that these non-criminal freedom-fighters are "killing PC gaming." No, they aren't. Publishers are killing PC gaming. There's millions of gamers like me who refuse to buy games from companies like Activision, EA, Take-Two, Ubisoft, THQ, Microsoft, Valve, Stardock and many others.

In fact, I'm hard pressed to think of a company that I'm not boycotting right now. Which kind of sucks, but you know what they say: "Sometimes you have to throw the baby out with the bathwater." Companies that refuse to respect my integrity and my freedom don't get my gaming dollars.

After all, as I think I've proved to my satisfaction, a pirated game isn't a lost sale. Jason Holtman of Valve said it best when he pointed out that "pirates are underserved customers." Admittedly, Holtman is a criminal by my own definition, but he's finally starting understand what you people refuse to acknowledge. Pirates want to buy games, but on their own terms. At a significantly lower price, for instance, and without any DRM schemes attached.

Maybe pirates are more discriminating about what they buy. Did anyone ever consider that maybe the rise in piracy is related to how much today's games suck? It's a well-known fact that no game made after 1998 is any good. Pirates are just gamers who like to try before they buy, and what do they find? That most current games are terrible, dumbed-down versions of the titles that PC gamers really want.

Maybe the problem is that there's so many developers churning out product for the high-chair and console crowd that their games aren't worth time, much less money.

Guys, this might be my last post here for awhile. I'm going over to GameStop and immolating myself in the parking lot.