Ninety-two percent is a pretty big number. A 92-percent failure rate would make a product totally unfit for public consumption. A 92-percent infant mortality rate would be nothing less than a mass extinction event. So how could a game developer survive if 92 percent of the people who played its game stole it?

That last question isn't hypothetical - it's the actual piracy rate of Ricochet Infinity, a casual game by independent developer Reflexive Entertainment. In an article for Gamasutra, Russell Carroll, Reflexive's director of marketing, detailed his company's firsthand experience with piracy and how they attempted to staunch the bleeding by modifying their in-house DRM scheme. By his tally, every 1,000 pirated copies of Ricochet Infinity that they rendered unplayable through DRM resulted in approximately one additional sale. For indie developers whose livelihoods depend on customers paying to play their games, it was reason enough to panic.

It's an unfortunate side-effect of the inherent openness of the PC as a platform: The same factors that have contributed to the rise of independent game development over the last five years - the ubiquity of PCs and the ease of digital distribution - have made these games an easy target for piracy. What's more, many of the shops developing these titles consist of only a handful of people. It might be easy for a radically anti-DRM gamer to justify pirating a game from a large publisher, where the costs are distributed between thousands of employees. But what if the only people affected by a lost sale are the game's creators?

Piracy gets personal
"I've had people email me and say, 'Hey, I downloaded your game and it's awesome.' And there were many times where I was like, 'F**k, I've been eating hot dogs and Top Ramen for the last two weeks, and this kid's telling me he just stole 20 bucks from me,'" says Edmund McMillen, co-developer of Gish, Grand Prize winner of the 2005 Independent Games Festival.

Initially published by Chronic Logic, an online casual and independent games portal, Gish was a critical success that didn't quite break through to the mainstream the way later IGF winners have. It's also one of the only games that McMillen has bothered selling at all - most of his games, including 2009 IGF nominee Coil, are free-to-play on sites like Newgrounds and Armor Games. 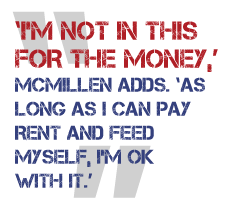 Perhaps this explains McMillen's nonchalance toward the idea of anyone "stealing" his work. "Gish was hugely pirated. I think it was one of the reasons why so many people know the game," he says. Instead of taking offense, McMillen just sees it as a way for more people to play his games. "Ideally, I'd love it if anyone who liked my stuff just had it if they couldn't afford it."

"I'm not in this for the money," he adds. "As long as I can pay rent and feed myself, I'm OK with it. If my goal was to have tons of cash, then I might be upset about how things are going. But I just want to make art."