Sometimes you just want to play by the rules. That's what I tell myself, anyway, as I continue to peck around in Sins of a Solar Empire, playing through tutorials to reacquaint myself with its particularly unique (and particularly complex) brand of gameplay.

I was inspired to return to the game by the sight of Dungeon Masters, dice and character sheets at New York Comic Con a few weeks ago. These plastic and paper menageries are, in their own way, precious, like the tiny Victorian Villages people painstakingly assemble every Christmas. But mostly I was inspired by the rules. I flipped through dense books of lifestyle-defining conditions and even watched a man explain an online card game, a kind of Japanese version of Magic: The Gathering, to an attendee for 20 minutes. And then there was the videogame area, which illustrated with booming audio and high-definition screens the growing schism between people who play by rules and those looking for something different.

We are a shrinking majority and a growing niche, those of us obsessed with gameplay systems and complex rules. Bottomless inventories and piles of menus have been replaced by characters who can only carry two weapons at a time and whose physical appearances indicate their health. Where videogame manuals once made excellent bathroom reading material, games are now accompanied by black-and-white pamphlets whose best advice is to use the in-game tutorial. 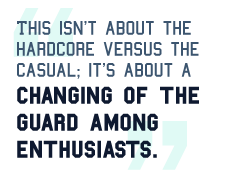 This is, after all, the way it should be. Who wants to read about how many hit points it takes to kill a dragon when you can just ignite your flaming sword with one button and swing it with another in a spectacular display of cause and effect? Quite a few of us, I imagine, but not enough to outweigh those for whom these exposed machinations mean nothing. This isn't about the hardcore versus the casual; it's about a changing of the guard among enthusiasts.

Older games showed us the man behind the curtain because they had no choice. There is an entire epoch of gaming history devoted to the transition from D&D rulebooks to on-screen immersion. Dragon Warrior and Might and Magic are games of menus, text and little illustrations by design - their great innovation was giving the Dungeon Master a break and hinting at a visual interpretation of a fantasy world. And with time, we've grown fond of these limitations. We dearly love the random battles that have us select an action instead of just doing it, and the fold-out tech trees allowing us to chart our progress like a project manager overseeing the construction of the world. Etrian Odyssey, a roleplaying game for the DS, takes this nostalgia even further. Its central conceit is that you must use the touch screen to make accurate and carefully labeled maps of the dungeons you explore in order to succeed - and homage to the painstaking maps people created for D&D campaigns.

Of course none of that matters anymore. Nothing you can draw by hand will be better or more accurate than the three-dimensional HD map in the corner of the screen. Map making isn't the skill; map reading is the skill. Take Metroid Prime, whose maps are fantastic wireframe images that require the player to think in three dimensions to understand them. These maps don't just give players the lay of the land - they show details like the approximate heights of entrances and exits in a room.