I was born with cerebral palsy, a non-progressive condition that affects the part of the brain that handles the limbs and fine motor functions. The disease rendered me unable to talk and confined me to a wheelchair. In addition, I only have full use of my right arm. As a disabled gamer, I've always been a little concerned about what the future holds. As it is, controllers have undergone a massive evolution over the past 20 years. They've gone from as simple as the original Nintendo Entertainment System controller to as complex as the PlayStation 3 controller.

Couple that with a genre like shooters, which use pretty much every button, and you run into a problem: The controls are too complicated for one-handed gaming. When you need to hold the controller a certain way, it inevitably leaves some buttons out of reach. That is my biggest complaint with the controllers for this generation, as well as the previous one: Disabled gamers can't use the shoulder buttons easily. Using the left analog stick and pressing the right trigger with one hand is pretty much impossible.

This isn't limited to just shooters. Other recent big-name titles such as Ninja Gaiden 2, Too Human and Star Wars: The Force Unleashed also use the majority, if not all, of the buttons, and the options to reconfigure the controls are severely limited. In all of the titles just mentioned, the shoulder buttons are so crucial to the gameplay that using them is mandatory. 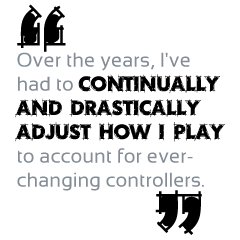 However, humans have an uncanny ability to adapt to pretty much any situation. Over the years, I've had to continually and drastically adjust how I play to account for ever-changing controllers. One title that you probably wouldn't think I'd be able to play is Ninja Gaiden 2. While blocking with the left trigger is an essential part of the gameplay, I do pretty well without it. In fact, when I play on Path of the Acolyte mode, the only real problem I've had is the second boss. I'm on Chapter 7 and I've beaten five of the six bosses so far with minimal blocking.

Another challenging title is Soul Calibur 4. Playing against the computer is fun and all, but after a while you see its patterns and it becomes boring. This is where having friends over and online multiplayer are helpful. While they are vastly different from each other, mostly due to lag, they are both useful for quickening your response time and reflexes, even if you can only press the face buttons.

By the Book tendo82 15 Comments