We know how it is. You're tolerated in your videogame fan community but could stand to be better liked - respected, even. It's a noble goal, but how can you achieve it? Clearly, it's no longer enough to simply like the object of your fan-affection. Anybody can do that. No, for some insane reason, today's fans must compete to demonstrate their love through wider creative expression.

There are three main avenues for those who wish to take their videogame fandom to the next level: drawing fan-art, launching a webcomic or penning the best damn piece of fanfiction the world has ever squinted at in confused pity. Just consider it: the limitless possibilities afforded by your imagination, a world of self-crafted adventures starring your favorite gaming chums. Here at The Escapist, we want to help you realize those dreams. We can't promise to make you the finest fanfiction author on the internet, but by God we'll try to make you just as derivative as all the rest. 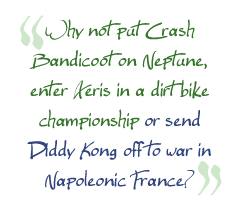 1. Scenic the Hedgehog
First, you need a setting. Your selected location will have a direct impact on your masterpiece, so choose wisely. Pre-existing levels from your game of choice may appear to provide an obvious background, but aren't terribly ambitious. You won't earn any fawning LiveJournal comments with your account of another robotic bee attack on Green Hill Zone. To gain recognition, you need to be a little more obtuse. Why not put Crash Bandicoot on Neptune, enter Aeris in a dirt bike championship or send Diddy Kong off to war in Napoleonic France? If you're having trouble thinking of a setting, just steal one from a favorite book or television program. Doctor Who, Harry Potter and Firefly all have terrific ready-made settings, eager to be rendered more ludicrous by the insertion of a bunch of videogame characters.

1(b). Canon Fodder
Thanks to the abundance of gaming spin-offs, it can be difficult to assert which parts of your preferred game are still canon. For example, after ten billion games, a couple of television productions and a comic, the world of Sonic the Hedgehog is now extremely complicated. You can be sure that if your narrative setting accidentally deviates from the canon then somebody in your readership will be upset. Feedback like "Issue #3 of the Official Sonic Magazine clearly states that Knuckles would have been involved in underwater Black Ops at that time" is best avoided. And adhering to the canon of something as sprawling as Final Fantasy is near impossible without some kind of degree from the University of Square Enix, and frankly that's far too much effort.

Avoid such troubles altogether with this simply phrase: "It's set in a parallel universe." Ta-da! Your harrowing story of Dr. Robotnik's lost years as a meth addict on the mean streets of Philadelphia just got the all-clear.