There is simplicity in being a fanatic. The complications of personal conflict, physical malady and the stress of being alive all fade away when the fanatic is deep in his chosen interest. Indeed, fanatics have distilled their lives into one passion, one focal point, and not necessarily at their own expense. Because in that singular concentration, fanatics find both solace and a way to define themselves. Obsession and addiction are mental struggles for those afflicted by them. For fanatics, their all consuming love is merely a type of devotion that is as fulfilling for them as it is disturbing to outsiders. Disgaea, in that sense, is a game tailor-made for fanaticism.

To understand why Disgaea speaks so strongly to fanatics, you first have to understand its foundations. Disgaea is a strategy RPG, a genre that, despite having examples in western videogames, is widely associated with its Japanese heritage. And for Westerners, the roots of the SRPG can be traced back almost squarely to the developer Yasumi Matsuno. Responsible for games like Vagrant Story and Final Fantasy XII, it was his game Final Fantasy Tactics that really introduced the modern conception of the SRPG to a Western audience. It certainly had plenty of predecessors, some of which had even made it to Western shores. Matsuno's earlier game, Ogre Battle, was an obvious forefather to Final Fantasy Tactics, and Shining Force was conceptually an SRPG. But it was Final Fantasy Tactics with its isometric perspective and deep class system that first sold the concept to Americans in a way that allowed the floodgates to open. 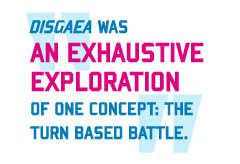 When it came out in 2003, Disgaea was the most colorful and the most distilled SRPG since Final Fantasy Tactics. Disgaea had a fairly developed narrative, but traveling between towns, hunting for treasure, seeing ever more fantastic environments - the idea that you were on a journey somewhere - had been largely abandoned. Environments weren't there to evoke a sense of place - they were created solely to service the battle, a design choice reinforced by sections of the game involving random dungeons. The graphics harked back to the PS1, a choice that became a hallmark of the series and a big middle finger to those who couldn't see it was the gameplay, stupid. Disgaea was about battles and leveling up, and there were a million different ways to go about doing that, even within the narrow constraints of an SRPG. It was an exhaustive exploration of one concept: the turn based battle. That focus - maybe even myopia - helped foster the series' devoted fanbase.

Other games certainly have their own fanatics. There is the Halo fanboy and World of Warcraft's millions. Their most rabid followers have reduced the games down to a series of formulas and habits, but it's significant that these games all have larger fanbases supporting them as well. The reason for this is the diversity of experience they offer. Even if we look at the real-time strategy genre, often categorized as a hardcore haven, there is a surprising amount of variety not only between individual games but also within the games themselves. Company of Heroes impresses players with its amazing presentation. StarCraft has an engaging storyline that has spawned a number of novels. As focused as Company of Heroes and StarCraft are, they also take care to create an experience that can't be reduced to a single element.

Letters to the Editor: The Fanatic Issue The Escapist Staff 0 Comments