Like countless other faces in the deviantART crowd, Nina "SpaceCoyote" Matsumoto was an aspiring artist. Laid off from a job as a florist, she managed to make ends meet for a few months by taking commission requests. Before resuming her job search in earnest, though, Matsumoto decided to take advantage of her free time to draw as many "fun" pieces as she could. A long-time fan of The Simpsons, Matsumoto drew a picture of the show's cast in her own manga-influenced style - something she'd been meaning to do for a while - and uploaded it to deviantART under the title "Simpsonzu."

The reaction was something that she could never have imagined. "Simpsonzu" became a hit quite literally overnight - from the front page of deviantART to Digg, and from Digg to everywhere else. Matsumoto woke up to find that she had become an internet celebrity, and it only got bigger from there. Magazines and newspapers picked up the story, including U.K. publication ZOO, which wondered if the picture's popularity could be bad news for its artist, claiming Simpsons creator Matt Groening was "notoriously litigious when it comes to any of his ideas."

Not only were ZOO's predictions unfounded, but exactly the opposite happened: Within a week, Matsumoto had been contacted by Groening's Bongo Comics to bring her manga style to the official Simpsons comic book. ZOO's skepticism wasn't without precedent - some creators struggle with the idea of fan-made derivative works. The issue isn't limited to art, either: Anne Rice, for example, has barred Fanfiction.net from hosting stories based on her vampire novels. 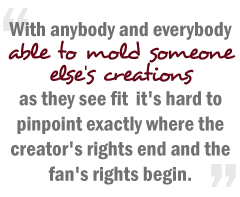 Other creators welcome them. After Buffy the Vampire Slayer went off the air, creator Joss Whedon encouraged fans to read and write fanfiction based on the series. Though different creators and copyright holders have their own viewpoints, sites like deviantART and Fanfiction.net allow anyone with the time and inclination to publish his own take on someone else's story and characters. With anybody and everybody able to mold someone else's creations as they see fit (and find an audience for it), it's hard to pinpoint exactly where the creator's rights end and the fan's rights begin.

Matsumoto is one of a small group of artists who have experiences on both sides of the story. "Simpsonzu" earned her a deal with publisher Del Rey, and the first volume of her original Japanese mythology-inspired manga Yokaiden hit shelves back in November. Like Nina Matsumoto, both Nathan Maurer and Jessie Lam have also seen both sides of the issue: After winning Tokyopop's "Rising Stars of Manga" contest, Maurer drew the full-length Atomic King Daidogan, while Lam does freelance work - most recently as the color artist of dinosaurs versus humans comic Neozoic. How had their experience as creators affected their attitudes as fans - if at all?

Whether it's a 10-year-old drawing Wolverine on his schoolwork or a 25-year-old drawing the cast of Street Fighter and uploading it to deviantART, making fan art in no way infringes upon a creator's right to control his or her IP. It's "just what fans do," argues Maurer, who goes by the name captainosaka on deviantART. While Matsumoto agrees, and in fact enjoys seeing fan art of her work, she points out that the situation gets much trickier when money is involved.

Does It Really Matter If You Make Your Own Cosplays? Liana Kerzner 2 Comments

Comics and Cosplay: Grateful for Groot: Greatest Fan Tributes to the Guardians of the Galaxy MarlaDesat 2 Comments
Comments on