Rob knew they were coming. It was the spring of 2006 and he was immersed in the MMORPG Shadowbane. He looked at the map and saw that the infamous guild called CN, consisting of mostly Asian gamers, was only three towns away from his guild's stronghold. Shadowbane is a game of martial PvP, with battles involving hundreds of well coordinated players. Rob saw that his ragtag guild just didn't have the numbers to defend against CN. He was certain they would become just another notch in the sword for the group that had steamrolled continents and even switched servers when entire worlds had fallen. Rob knew that something had to change. He needed something that would multiply his guild's forces in time to defend themselves from this new threat. How could they increase their numbers significantly in such a short time? He thought long and hard, until he had a crazy idea. 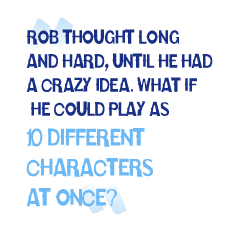 What if he could play as 10 different characters at once?

Rob's strategy is called "multiboxing," i.e. one player running two or more copies of the same game on different accounts to tackle more difficult content. Before 2006, most people were hardware multiboxers and played with two separate computers, two keyboards and two quick hands. Rob, however, approached the idea with his software developer's brain and forever changed the way multiboxers played.

Multiboxing isn't new. Players have realized that it could be advantageous to run more than one character ever since text-based MUDs were the only online games out there. When Ultima Online and EverQuest were released, it didn't take long for players to grab extra accounts to help them through content or protect their characters. A longtime multiboxer named Hor first noticed it when he began raiding with his guild in EQ "A lot of the tanks in the guild had heal bots," Hor says. "They kept a cleric on a second computer and just healed themselves as necessary." There was very little support in the game to multibox, and third-party applications were sometimes necessary. "I ran two similarly configured machines, each running two characters with a program called EQ Windows, which allowed EQ to be played in a window mode, allowing for alt-tabbing between instances of the game," explains Clovis, who's been playing MMOGs since he was 17. "I literally played with one keyboard on my desk and another in my lap, with two mice side by side."

While multiboxing was common enough in older games, the immense popularity of World of Warcraft in turn increased the number of multiboxers. "WoW hit, and everything changed," says Hor. "Suddenly it seemed like all of my friends were playing one game again." World of Warcraft brought in so many different types of people that it was inevitable that the population of multiboxers would increase.