Beyond the obvious requirement for natural-sounding dialogue, coherence and respecting the original creators' vision, everyone has their own interpretation of what makes a good localization. Generally everyone agrees on the need to create a parallel experience for English-speaking players, but as Blaustein reiterates, "People mistakenly think if you translate the words or names directly, somehow you're going to be conveying more of the original essence." He explains how certain words have an exotic echo to the Japanese ear; to replicate this in English, the sound needs to be changed, such as when Woolsey renamed Tina in Final Fantasy VI to Terra. Blaustein agrees with the decision: "I'd say Ted was right on the money with Terra. I had this exact conversation with Kojima on Metal Gear Solid. We were talking about characters, and I said, for a Japanese person it has a foreign quality. 'Decoy Octopus,' however you slice it, sounds hokey in English. Looking back, it worked, but not for the same reason the Japanese worked - to them, it comes across as impenetrable." 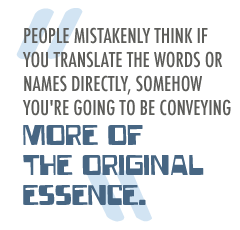 Translation also needs to be seamless. Leaving some things unexplained alienates those unfamiliar with the culture. Bill Swartz of Mastiff Games is critical of sometimes lazy localizations, using the kappa, a mythological Japanese creature, as an example: "I would argue that if you were to just say 'kappa,' then you haven't localized it. You've done a mish-mashed job which is going to be dependent on pre-existing knowledge. If it's there seamlessly for the Japanese because they have a knowledge of what 'kappa' is, then it's incumbent upon you to either explain it or insert a word so that it's seamlessly apparent to the target audience."

As Woolsey explained, the Japanese can have a different method of conveyance. "Some Japanese writers ... link themes, ideas and images together in ways that are less story driven, and more suggestive or lyrical. There are times where a translator, without access to footnotes, needs to pad a bit to get a point across. Some central themes in RPGs, such as filial piety, duty and obedience to teachers, elders and authority don't play quite as well outside of Japan, and need additional verbiage to explain."

Sometimes it's not just the script but a game's overall structure which needs to be changed. "The Japanese version of Tenchu was a fantastic concept with some technical issues," says Swartz. "Working with the original developer we added levels, fixed camera issues, frame issues, did a bunch of cleaning-up and created an amazing product."

And there are times when change is crippling. Working Designs infamously rendered Exile 2 and other games impossible due to increased difficulty. As Working Designs explained at the time, this was due to the liberal return policies in the U.S. and the concern that leaving the game as-is would result in a large portion of "extended rentals" at their expense.

Fandom for Japanese games is often intense, and while some changes during localization are for the best, fan expectations can limit a company's options. Swartz recounts an interesting story while working on La Pucelle: "There were a couple of scenes where there were these cross-like structures, and the whole thing was the most incredible temptress in a teapot, in that we were accused of censoring it. We even ran the screenshots side by side. But some random fan got hold of it and it turned into a firestorm. That to me served as a reminder of how sensitive the hardcore market is. I read a lot of the postings, and people really spent time, and there'd be one guy with some Japanese trying to rate our translation." Despite the scrutiny, Swartz doesn't regret the experience. "It was amusing and gratifying. Mostly gratifying, because we spent a ton of time on that. It wasn't like you get the assets and pass it to the translator and then he comes back and you're done. It was hundreds of hours of my time, of the producer's time, sitting around the table, reading stuff out loud, asking ourselves 'does this express motivation' and so on."