And before gaming historians recall how the pre-web trading card game Magic: The Gathering devastated tabletop RPG sales, remember Magic benefited greatly from the internet. Even in 1993, when the World Wide Web consisted of a few hundred university sites, fans on Usenet compiled card lists and traded deck builds. That early networking boosted Magic from a hit to a phenomenon.

In a world where the internet never existed, people would still want to network in structured ways. Tabletop RPGs would still reign like brontosaurs before the meteor.

But you know what? That would be bad.

I wish no ill on the long-suffering "three-tier" industry of publishers, distributors and retailers. But without the net - in particular, without the indie RPGs that flourish here - I'm guessing my field would become artistically stuck, stagnant. We'd have little roleplaying theory. Diehard individualist designers would publish fanzine-format rules sets as always, but we'd have no cauldrons of creativity like The Forge, Story Games, 1KM1KT, 24 Hour RPG or Game Chef.

It may be true that the only reason the comic book industry now exists is for this purpose, to create characters for movies, board games and other types of merchandise. Comics are just a sort of pumpkin patch growing franchises that might be profitable for the ailing movie industry. 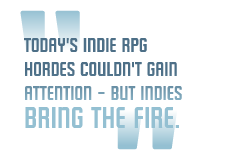 Wizards and White Wolf even now grow such patches for their corporate overlords. In an un-netted world, it would be worse. Today's indie RPG hordes couldn't gain attention - but indies bring the fire.

More to the point, roleplayers in a non-networked world might have less fun. These benighted players would lack play aids like RPTools and DungeonMastering, campaign chronicling via Obsidian Portal, art repositories, sound mixers and tremendous resources like the RPG.net Game Index. They'd lack ENWorld and hundreds of other quality roleplaying sites.

Perhaps those deprived folk might still enjoy DM of the Rings, Dungeons and Discourse and Advanced Dungeons and Discourse - maybe even some offline equivalent of GOLD ("The web series that does double damage") - but could gamers hope for Epic D&D Vacations on the beaches of Kauai? ("Your opportunity to take a character from Level 1 to 30 ... and get a tan while you're at it!")