The world is better for all these. And tabletop roleplayers, make your Morale roll at +6: Even among hardcore traditional roleplaying groups, the web, which has taken away so much, is now giving back. Through the web, even the act of roleplaying is getting better. 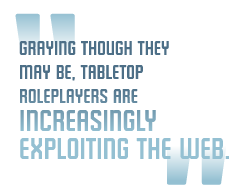 Graying though they may be, tabletop roleplayers are increasingly exploiting the web. Take the "old school" movement. These unreconstructed grognards, such as tireless blogger James Maliszewski, still prefer 1974-era D&D, meaning the primordial three-booklet edition derived from the miniatures game Chainmail. They suspect even D&D's thief class (introduced in Supplement 1, Greyhawk) as an adulteration. In an un-webbed world, guys like these would have met, at best, a few times a year at game conventions to roll some D12s and bitterly chaw their dentures. Now, coordinating through forums like Knights & Knaves Alehouse, they publish clever rules that capture the spirit of Ooooold D&D without violating copyrights (OSRIC) and write for the magazine Fight On!

This, in itself, only confirms how the web harbors micro-communities for every inclination. More interesting is the idea of moving the tabletop experience itself online - not in 3-D virtual environments a la MMOGs, but rather via voice chat (TeamSpeak, Skype, Ventrilo - just like your WoW guild) and "virtual tabletops," where your screen shows grid maps and miniatures. With no more artificial intelligence than an automated die roller, your Game Master resolves all actions by hand using a tabletop rules system.

The best virtual tabletops offer niceties like fog-of-war and turn sequencing. Better, they can reunite old-time groups who played in college dorms but then scattered to the winds. They help isolated players find groups interested in their favorite games. Where so many other internet activities have devastated the paper-and-dice roleplaying hobby, virtual tabletops help keep it alive.

Man, if I'd only had these back when I was young - zzzzzzzzt OWWW!