It's a common enough situation for many gamers: After what must've been hours of play, there's only 15 minutes left until another engagement like school or work pulls you away from your game. It's not enough time to accomplish much of anything in most games - but that doesn't stop most of us from trying.

This seems to me like a perfectly illogical action. In an FPS, it's barely enough time for a few gunfights, let along an entire level. In an RTS, it might allow for one last push into your enemy's base, but not much more. You could explore a few more rooms of a dungeon in an RPG, but you're probably not going to make it to the boss. These 15 minutes are the last cathartic moments of fun before responsibility sets in.

Why are we so fond of these final moments of gameplay? Considering the many hours we spend with most videogames, how did these 15 minutes becomes so crucial, so necessary? Maybe it boils down to something unique to the modern human condition. 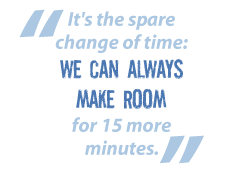 There is something about that duration of time that is inherently acceptable to us. Fifteen minutes seems to be roughly the smallest unit of time we can devote to something that requires intense attention. TV infomercials sell workout routines promising a "new you" in 15 minutes or less a day. We frequently hit the snooze buttons on our alarm clocks once or twice, since 15 minutes is just enough time to get another wink of sleep without worrying about being too late for work or school. It's the spare change of time: There's no chore in devoting 15 minutes toward something, nor are there repercussions for spending such a paltry amount of time frivolously. We can always make room for 15 more minutes.

Casual games seem to have run furthest with this idea - their entire system of gameplay is designed around 15-minute chunks of playtime. But this concept hasn't been lost on AAA titles. Most Valve games come with auto-save features, and titles like BioShock and the Halo series give you frequent checkpoints. When reality is closing in on the horizon, there's still incentive to progress in these games. Even in the worst case scenario, when you die right before a checkpoint, in the back of your mind you know it's only a few more minutes until you can play that part again.