My parents are about as interested in gaming as I am in fly fishing or step aerobics. Yet in the early days of the Nintendo Entertainment System, they both developed a borderline-unhealthy obsession with Dr. Mario. Eventually, their enthusiasm for the game waned, and with the exception of Spider Solitaire for my mother and internet chess for my father, no videogame since has appealed to them.

My dad, however, learned something from this experience. From Dr. Mario onward, he's been decidedly against allowing any type of console in our house. His reasoning is simple: If he could be sucked in by a simplistic Nintendo-branded Tetris alternative, then videogames as a whole must be addictive. And believe it or not, plenty of people in the real-world medical community concur with that diagnosis.

That includes Brent Conrad, a Ph.D. candidate, practicing clinical psychologist and something of a specialist on videogame and online addiction. He's also a self-described gamer. Conrad runs a website, www.techaddiction.ca, which includes information on videogame and online addiction, a support forum for addicts and a downloadable self-help book. " I have certainly worked with people who have lost their jobs, their relationships or have dropped out of university due to spending 40, 50, 60 hours a week online," he says.

He's not alone. Dr. Maressa Orzack is a clinical psychologist and Harvard Medical School faculty member. She's also the head of Computer Addiction Services at the McLean Hospital in Belmont, Massachusetts. According to her website, she first became interested in computer addiction when she noticed similarities between her Solitaire habits and the addictive behaviors she had studied for over 15 years.

Orzack's research has been focused on the addictive properties of MMOGs. In an interview with Ars Technica, she talked about how MMOGs use variable ratio reinforcement to create an environment that often leads to detrimental play habits. In a separate interview with the Manitoban, she mentioned how addicts "get that sense of belonging, they blend with other people." But what really separates the World of Warcraft junkie from a casual player is "presence" - as Orzack puts it, "where you essentially suspend disbelief, and you're just there." In other words, the game starts to feel more real then real life. 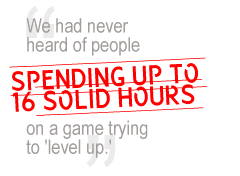 Conrad and Orzack aren't the only ones focused on rehabilitating game addicts. The Smith and Jones Addiction Treatment Center, located in Amsterdam, opened the first clinic for videogame addiction. Founder Keith Bakker, a recovered drug addict, told MTV news, "We began to see a need for attention in this area in 2005, when a small number of clients being admitted for drug and alcohol addictions were also telling us about their compulsive gaming behavior. This was new to our staff - we had never heard of people spending up to 16 solid hours on a game trying to 'level up.'" According to Bakker, "We got one kid in who was gaming 18 hours a day - I wanted to send him somewhere, and we looked around and there was nothing." That helped motivate him to start the facility.