Ellen Ripley returns to LV-426, where Weyland-Yutani has lost contact with the colonists. Aliens are everywhere. Will Ripley and the Colonial Marines escape? That's act one.

Ripley and a dwindling cast of allies fight aliens to the left, right and center. Ripley and Bishop alone manage to get the dropship and get it to the landing platform. The question is answered: Yes, they'll escape. Act two.

What then? Well, with Newt gone, Ripley has a change of heart. She won't leave the kid behind. She descends back into hell for another go-round with the aliens (and then another, aboard the Sulaco) before we finally fade to the credits. Act three.

It's immediately evident that "Will Ripley and the marines survive?" is the dramatic question of Aliens, because there is a clear pairing of hope and fear in the audience's guts - hope that our heroes will make it, fear that they'll all die in spraying acid and flashing claws.

You'll hear people say that first, second and third acts are as simple as "beginning," "middle" and "end," or as easy as "put the hero in a tree," "throw rocks at him" and "get him down." The former trio is accurate but insufficient. After all, a garden hose has a beginning, middle and end. The business with rocks demonstrates only the most crude understanding of what goes on inside a good story. It's dangerous thinking because it suggests that observing the protagonist's pain is the only thing that makes a story interesting, as though the primary motivation for moviegoing is sadism. A thousand times "no" to that. The goal for any movie is the audience's emotional involvement, and the route is a compelling dramatic question.

"Very nice, but why should I care?" is the relatively obvious response to this three-act nonsense. You liked movies plenty fine before this filmic underwear was exposed to you. You suspect you'll still like them just fine after this nonsense has been purged from your brain by the 40 or 50 ads and trailers that spool out before a movie starts these days. 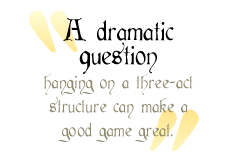 But I humbly submit that if you make a bit of extra room in your brain for this three - act principle, it will become one of the best tools you have for making any kind of story you create more engaging. And that goes for games, too. A dramatic question hanging on a three-act structure can make a good game great, and even make a barely playable game hard to put down.

For the most part, working game designers ignore this tool, and here's what passes for a dramatic question in most games as a result: "Will you win?" That's a fine question, and it's the essential power behind plenty of fine gameplay, from Sudoku to Wii Golf to Dawn of War II. But it's also next to impossible to make an emotional investment in the answer to that question. It's easy to make an ego-based investment in it, which explains all the tea-bagging. But the positive feedback loop of "Will you win?" relies on the fact that accomplishment feels good, not on any empathy you feel toward your in-game avatar.