Before going further, a short digression into the fractal nature of a film's division into acts. In addition to applying a three-act structure to a film as a whole, it's equally possible - and useful - to see that division inside each individual act, sequence and scene. Like the most effective movies, the most effective scenes also establish a compelling dramatic question, answer it and then ask a follow-up question. Will Luke beat Vader? (Act one.) No. (Act two.) And you know what's interesting about that? "I am your father." (Act three.) It's turtles all the way down.

You're ahead of me now, I hope: Most games also break down in a similar fashion. Say that the subatomic particle of gameplay is shooting something. Those units organize into shooting something often enough to kill it. You kill enough enemies and you win a shot at the level boss, and on and on, through broader and broader organizational units of gameplay until you're fighting the final boss for ultimate victory.

But most games focus only on what filmmakers would define as the second act, the "will he/won't he" question. Let's be clear: There's plenty of "will he/won't he" in this week's hot new AAA title. Game designers have gotten really, really good at crafting devious and fun "will he/won't he" variations in genres from FPS to match-three games like Bejeweled.

But at the end of the day, the problem is that without a dramatic question any deeper than "Will you win?" and without a "What then?" follow-up, there's little emotional investment. The increasingly flashy, constantly posed and re-posed "Will I win?" questions totally disguise that lack of depth, to the point that most people don't realize what they're missing. 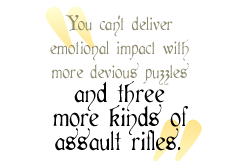 My argument, essentially, is this: If you're questing for that game design Holy Grail where the player cries at the end, you have to search not in the gameplay itself, but in what sets up the gameplay and what happens afterward. You can't deliver emotional impact with more devious puzzles and three more kinds of assault rifles; looking for the answer there is just plain stupid, even if it is the common wisdom.

Interestingly, filmmakers also often find themselves looking for solutions to their problems in the wrong places. As often as not, a test audience that reports boredom at minute 60 isn't bored because of anything that's wrong with minute 60. They're bored because minutes 3 through 15 didn't do their job telling us why we care in the first place. So, like a great director, a great game designer looks outside the frame to make the picture that's inside it a masterwork.

Of course, it's difficult and in many cases pointless to apply these ideas to non-narrative games. Dramatic scaffolding will encumber Sudoku, not improve it. But it's not an all-or-nothing proposition. Even simulation games can benefit from erecting a primitive yet emotion-based three-act framework on a foundation more profound than "Will you win?" And at the other end of the spectrum of games, where the player-avatars are full-blown people with meaningful choices ... for games like that, the upside is profound.

Jeff Tidball is a freelance writer and game designer with a fancy screenwriting degree and everything. Come say "hi" at gameplaywright.net and jefftidball.com.