Sure, you've seen movies that are shorter (most animation) and longer (Peter Jackson), but you've also seen pickup trucks with six tires and you'll still tell anyone who asks you that a car's got four wheels.

The script for a Hollywood feature film is 110 pages long, because it turns out that a page of script takes, by and large, a minute of time to play out on screen.

Film business outsiders are often surprised to discover that a movie's length is so proscribed, and that the correspondence between script length and film length is so definite. But they're usually even more surprised at the concrete structure of what goes inside those 110 minutes and pages.

Yes, most moviegoers know instinctively that films are formulaic. But comparatively few know that a massive body of common Hollywood wisdom dictates that on page 27 of the perfectly paced script, the first act ends with the declaration of a dramatic problem, with which the protagonist will grapple for the next 63 pages and answer conclusively on page 90 at the end of act two.

It's possible that Google will break irrevocably when indexing this page, having, as it does, the words "Hollywood" and "wisdom" next to each other. Sorry about that. But as much as the page-27 and page-90 benchmarks are give-or-take estimates, a concrete way of thinking about three-act pacing does, in fact, prevail in Hollywood filmmaking. 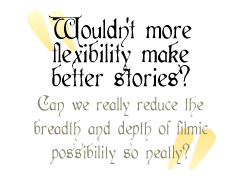 It sounds stifling, presented so starkly. Wouldn't more flexibility make better stories? Can we really reduce the breadth and depth of filmic possibility so neatly?

Here's the "no": The numbers 27 and 90 are slavishly obsessed about only in screenwriting books and classes that promise to reveal the secrets ("Secrets!") of success ("Fame! Riches!") in Hollywood. But there's some truth behind the gurus' hype: The fact that you can distill any decent narrative movie - any movie that tells a story, even a documentary - into three acts is no more negotiable than the reduction of the English language into 26 letters, or the reduction of computer code into 0s and 1s.

To leave the gurus and their get-rich-quick prescriptions behind, the sensible way to think about acts is not in terms of magic numbers, but in terms of function. So here it is:

The third act answers the question, "What then?"

For those edicts to make any sense, they require a clear definition of the term "dramatic problem." A dramatic problem is a question - always a question - in whose answer the audience is emotionally invested and regarding which they have very clear, very concrete hopes and fears. As an example, let's take a look at the movie Aliens.

Escapist Podcast - Science and Tech: 035: Did Life Come from Mars? The Escapist Staff 9 Comments
Comments on