Choice. Failure states. Interactivity. These separate games from every other art form. If you want static introspection, look at a painting. If you wish to formulate a vivid story in your mind, read a book. If you want your own personal choices to have an impact on an imaginary world, play a videogame.

Yet many modern games - the BioShocks and Fallouts - also strive to place you in the middle of a thrilling, emotionally involving story. As much as gamers may enjoy these experiences, they're built on an intrinsic contradiction that Jonathan Blow pointed out in his 2008 MIGS lecture: If well-told stories rely on specific pacing and structure that necessitate authorial control, then doesn't the interactivity of games run completely contrary to narrative?

While Blow's personal solution to the conflict boils down to "don't use story," several recent mainstream titles have attempted to disguise the problem with an imaginative, if surprisingly deceptive tactic: by lying to the player and secretly downplaying - even to the point of removing - the interactivity that make games alluring in the first place. 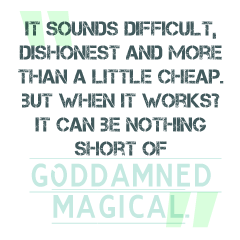 Here's how it works: Present players with a scenario, and actively trick them into believing they have more control over the events than they actually do. The experience will have the emotional impact the designer intended, and players will (mistakenly) believe that they were in complete control the entire time. It sounds difficult, dishonest and more than a little cheap. But when it works? It can be nothing short of goddamned magical.

At the climax of Valve's Half-Life 2: Episode Two, you must defend the White Forest resistance base against an army of enemy Striders. The bad guys will spawn on the opposite side of the map from the White Forest base, you're told, and they'll systematically destroy every building they find until they reach your allies' outpost and end the game. The implication is clear: The Striders are going to come as fast as they can, and you must destroy them before they reach the last base. Nothing apart from your own intervention will prevent them from reaching their goal.

This is a lie.

In reality, Valve designed the entire sequence around a very specific emotional arc that you can only circumvent by performing either remarkably well or remarkably poorly. "To create a climactic finish to this level," the Episode Two developer commentary states, "we ramped up Strider density and citizen presence, and systematically destroyed outer installations in order to move the action as uncomfortably close to the base as possible.

"It was important to us that everybody be able to play to the end of the episode, but we also wanted them to feel that defeating the Striders required a heroic effort," the commentary continues. "A balance had to be achieved between the feeling of being overwhelmed and the possibility of completing the level." In practice, this means that the Striders will speed up, become more aggressive and force their way to the missile base in the level's final moments no matter what. The pace of the onslaught depends just as much on the emotional content of the scene as it does on your performance. And since the game never reveals this little bit of backstage meddling, you can experience the exact tension the developers want you to feel, all while ignorantly assuming that it was your skill with the gravity gun that let you destroy the final Strider less than half a second before it would have blasted your base to smithereens.