There's no mistaking it: The Wizard was a commercial.

Roger Ebert said as much in his review of the film. The Angry Video Game Nerd, as he is wont to do, tore it a new one. It's a movie forever to be defined by its worst moments, like the introduction of the Power Glove and the three days that the "heroes" of the film spend on the phone with the Nintendo help line, which, if memory serves, would have cost about $50,000. 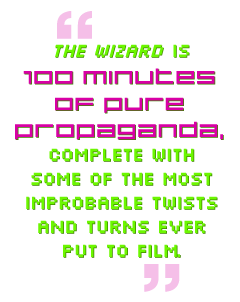 It's 100 minutes of pure propaganda, complete with some of the most improbable twists and turns ever put to film. You don't have to pick holes in it - they're already there in plain sight, completely apparent to anyone who's watching. And yet, if you were 10 years old, this flawed, overwrought big-screen advertisement was pure movie magic.

The Wizard was a nexus of brazen marketing and unrestrained consumerism. to the point where it may never have been possible - or, at least, as readily accepted by the moviegoing public - to make a movie like it in any year other than 1989.

In 1989, a movie about video games had to be a movie about Nintendo, because Nintendo was the only game in town. No disrespect to the Sega Master System, but Nintendo was riding a wave of success that simply hadn't been seen in videogames to that point, all of which led up to perhaps the most highly anticipated videogame release of all time: Super Mario Bros. 3.

There wasn't a Nintendo owner who wasn't looking forward to Super Mario Bros. 3, and at a time when the internet was barely more than a glimmer in Al Gore's eye, details on the game were almost impossible to come by. When word got out that there was a movie with a full five-minute scene devoted to it, well, every 10-year-old in the country needed to see it.

As it turns out, 10-year-olds may have been the only ones who needed to see the movie; it debuted at No. 5 and quickly fell off the charts and out of theaters.

Unfortunately, as much as the movie tried to show otherwise by having stiffs in business suits at an arcade machine and the bumbling dad, played by Beau Bridges, learning the intricacies of Teenage Mutant Ninja Turtles, the gamer constituency at the time was remarkably limited - devoted, sure, but limited. Games were kid stuff. They were candy coated and colorful, and their mechanics were simplistic enough for a prepubescent audience to master. A directional pad and two buttons was more than enough to do everything that gamers could imagine, because "gamers" in the NES's sense weren't coordinated enough for much more than that. The complicated control schemes were left to a niche PC market that was entirely too sophisticated to get caught up in the kid stuff.