After trekking for what feels like an eternity across a barren, desolate wasteland, you see the Colossus lumbering in the distance. With nothing but your bare hands, you scale its fur - and-rock-covered hide in search of a weak point. As you climb higher, the great beast thrashes violently to throw you off its back. Then you spot it - the sigil at the top of its head, the gargantuan creature's only vulnerability. You draw back your sword, and with one mighty thrust, plunge it into the monster's head. A fountain of inky blood sprays forth from the wound. The colossus trembles - is it really dead? - and hangs in the air for a moment before finally crashing to the ground.

Thanks to the higher powers of choice, this scenario never unfolded. Shadow of the Colossus was a masterpiece of immersion, a flawless recreation of a ruined fantasy world where ancient stone sentinels roamed the land. Its greatest achievement was to make you feel that it was more than just a game - it was a living, breathing place.

But a game like Shadow of the Colossus would never be possible on the Xbox 360. 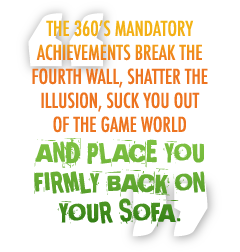 Like a knowing wink to the camera, the 360's mandatory achievements break the fourth wall, shatter the illusion, suck you out of the game world and place you firmly back on your sofa, pausing only to tussle your hair patronizingly before giving you another daft, mundane task to complete. In an era where games strive be more immersive than ever before, achievements come along and bash you over the head with a placard labeled "You're Playing a Game, Dumbass!"

The fourth wall is the imaginary boundary between the viewer and a fictional world in a movie, play, TV series or any work of fiction. Breaking the fourth wall - having a character acknowledge the fact that they are in a work of fiction - can be a useful technique under the right circumstances. Think Will Smith's knowing glances to the camera in The Fresh Prince of Bel-Air, or Ferris Bueller's asides to the camera in Ferris Bueller's Day Off. (Perhaps I'm showing my age with those two examples, or breaking the fourth wall has fallen out of favor as a comedic device).