The first time I noticed the name "International Hobo" was in a session on game design at GDC a few years back by Ernest Adams. At the bottom of the final slide of his presentation, I spotted the mysterious organization's blue insignia. I have to admit I was drawn in by the name alone. Who is this hobo, I wondered, and why does he have his own logo?

With the judicious use of Google, I soon discovered International Hobo is a consortium of creative videogame professionals that provide consulting and contract work to companies around the world. And much to my chagrin, I realized I had already met another member of International Hobo through the IGDA. His name is Chris Bateman, and at the time he was Chair of the Writing Special Interest Group, where I was an active volunteer.

That was years ago. Time has rolled on, and many things have changed. Bateman is still active in the IGDA, but mostly on the diversity committee these days. International Hobo's headquarters moved from the U.K. to the U.S. and back to the U.K. again. And, as Bateman likes to remind people, they recently completed their original 10-year business plan - not exactly a common occurrence in the videogame world. So they must be doing something right. I tracked Bateman down to gain some insight into their success. 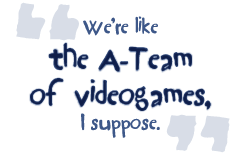 "We're like the A-Team of videogames, I suppose," says Bateman, referring to the way they keep a stable of highly-qualified contractors available for quick deployment on projects where they best fit. Bateman says International Hobo (or "ihobo" for short) has people with "skills in game design, narrative design and dialogue scripting helping developers and publishers whenever they need it, and occasionally working on projects of our own devising. We've worked on more than two dozen published videogame titles across all platforms, and dozens more that never saw the light of day."

I had to ask: Why base the company out of Manchester, England? "Blame my wife," said Bateman. "She didn't want to live in London again! But that's only part of the story, I suppose ... Manchester had a lot of advantages: We had friends there, it has a major international airport and it was - past tense - the center of a thriving videogame development community. It was somewhere that offered a lot of clients on our doorstep, with London and Europe within easy reach."

Sounds great. But what's that "past tense" bit about? Bateman explains: "We have some of the best game developers in the world operating in the U.K., but I must say, until recently the government has done very little to capitalize on all of the home-grown talent. They have largely sat back and watched as some of our most talented developers have gone under, and the successful companies like DMA Design (now Rockstar North) have been bought up by foreign capital. While the powers that be were trying to prop up a flailing British movie industry, one of the most successful videogame industries in the world was falling apart.