The above comments aren't from a message board for the latest Hollywood heartthrob or teen idol. They're all taken from a growing Facebook group dedicated to what is generally agreed to be the one of the most terrifying videogame characters ever created: Silent Hill's Pyramid Head. They're also all from young women. While the group's numbers are small (currently only 736), its continued growth has surprised even its own members.

Tamera, 22, creator of the "Pyramid Head <3" group on Facebook, was initially shocked to discover that she wasn't alone in her love for the survival horror series' gruesome antagonist. But since the group has gained more followers, she's begun to realize that the fantasy isn't as uncommon as she originally thought. 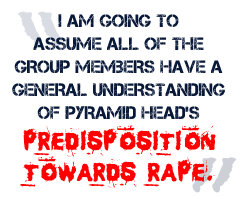 She surmises that the character's mystique is at least partly a product of his tendency toward sexual violence. "I am going to assume all of the group members have a general understanding of Pyramid Head's predisposition towards rape, and many of the comments do revolve around that," says Tamera. "But most fans are just voicing their love or sexual desire for him."

"He's so sexy, how he kills everything he sees," says Sharon, 14. "Pyramid Head is bad, and at the same time he plays the role of a reaper, and I love that."

"Pyramid Head has a very muscular body which attracted me," admits Victoria, 18. "Even though you cannot see his real identity, the thought of a very attractive yet disturbed person under the helmet excites me."

"I think it's all down to a violence fetish," Victoria continues. "Some women like play violence or get turned on by the violent scenes. Since it is a game and not real life, women see Pyramid Head as a figure of sex and would want to give themselves to him."

Katrina, 21, who shares her Pyramid Head fanfiction with the group, has also written Harry Potter fanfiction and novellas but feels that with Pyramid Head she can be more perverse and explore the darker areas of human sexuality and fear. "I find his unrelenting sociopath nature and the fact that he is not governed by any moral or social obligations dangerously sexy," she explains.

"The sheer brute force and brutality he displays is the same thing that drives good girls to like bad guys," adds Katrina. "The hope or fantasy that should you come upon him in reality you could be the one that he does not hurt or rape, that you could 'tame the savage beast.' It's a pleasant fantasy."