I have a confession to make: I'm obsessed with videogame music. More specifically, I'm obsessed with videogame music from Eastern composers. I bow to the talent of Yuzo Koshiro, drool at the mention of a new Michiru Yamane soundtrack and worship the ground Motoi Sakuraba walks upon. I also think Nobuo Uematsu is a hack, but that's another article. 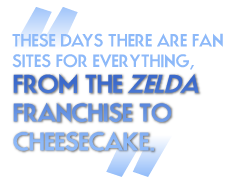 Thankfully there is a haven on the net for people like me. In fact, there's a haven for pretty much everyone on the net. I speak, of course, of fan sites, and these days there are fan sites for everything, from the Zelda franchise to cheesecake.

Acting as a sanctum for avid devotees, fan sites provide a service. They are the glue that holds together niche communities all over the world. Fan sites are the essence of that now over-used catch-all term, "the long tail." What they usually are not, at least at their inception, is a business. So what happens when a site moves beyond simply providing a meeting place for people of like interests and starts trying to turn a profit? Gather 'round, friends - it's time for a story of camaraderie, rivalry, vengeance and even a little tactical espionage.

First, a little background on how fan sites function. These sites are started by people who know their particular passion inside and out and have a vision of exactly how to present that information to other fans. If the site catches on, the workload eventually become too much for one person to handle and the founder will typically select a group of volunteers, usually from the site's forums, to help with day-to-day operations. A passion and knowledge of the source material are required for these recruits. Punctuality, previous experience or even rudimentary social skills, however, are not.

My tale begins in earnest in 2002 in the heart of the Colorado where lived a young web developer with a love of videogame music much like my own. His name was Tim, and he took it upon himself to create a fan site dedicated to the company famous for producing some of the best composers the East had to offer: Squaresoft. Tim soon sought help with the site from a music theory major at Oxford who we will simply call "Chad." And so was born the partnership that started it all.

Fast forward to 2003 when I entered the picture. I had just moved for the third time since starting high school to the sleepy little town of Salem, MA. I was tired of the social game, and instead chose to bide my time online instead of at the mall or weekend parties. (Back then, the irony of such a philosophy was lost on me.) I first stumbled across Tim's site the following summer and quickly joined the forums. It was a small, close-knit community - my favorite kind of online environment. Most importantly, everyone seemed friendly and there were quite a few interesting characters.

I quickly built a reputation among the forum members and became good friends with both Tim and Chad. So when several positions opened up, I volunteered my meager experience with online journalism and took my place among the staff as a news contributor.