An enlarged and framed EGM cover hangs in the lobby of 1UP's downtown San Francisco office, highlighting a feature on "The Future of Videogames." It's a bit of unintentional gallows humor at the former editorial headquarters of the Ziff Davis Game Group. Just a few years ago, it would have been hard for long-time fans to envision a future of videogames that didn't include EGM. Now, following the death by a thousand cuts of a publisher that defined American games journalism, that confidence is harder to come by. In the face of so many layoffs and closures within the enthusiast press, quality coverage of the games industry seems threatened by shaky business models and a bad economy.

A few days after Ziff Davis announced they were shuttering EGM, 1UP Editor-in-Chief Sam Kennedy spoke with MTV's Stephen Totilo about the company's decision. Kennedy's assessment? "The games industry didn't support it." But other game journalists weren't satisfied with that appraisal. Variety's Ben Fritz expressed many people's feelings when he asked why Ziff's Games Group found itself so vulnerable in the first place. 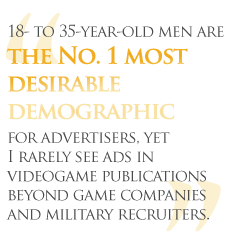 "The obvious retort is: Why did you need the games industry so badly?" Fritz said. "That shouldn't have been a problem for EGM. Their core readership is teenage boys and young men. 18- to 35-year-old men are the No. 1 most desirable demographic for advertisers, as they're so hard to reach since they're often doing things like, well, playing videogames. EGM had that audience. Game Informer and GameSpot and Kotaku and others have it. Yet I rarely see ads beyond game companies and, occasionally, military recruiters. A few times I remember seeing car companies and a TV show or two, but that's about it.

"Of course it's easy for me to sit here and say what the ad sales people shoulda/woulda/coulda done," Fritz continued, "but to me, the fact that they were unable to crack that nut is the true tragedy, because it could have turned publications like EGM, and thus quality videogame journalism as a whole, into a much more viable business."

Fritz's complaint is not a new one. Shortly after Jeff Gerstmann's controversial departure from GameSpot, N'Gai Croal wrote a grim assessment of the relationship between the gaming press and the companies who advertise in it, which he feared was increasingly marked by intimidation and ethical compromise. Similarly, when Games for Windows Magazine closed last spring, the GFW Radio podcast discussion focused on the obviously dysfunctional business structure that most American gaming magazines rely upon, which uses high circulation and endemic advertising (the practice of selling ad space to companies within the same industry as the one a publication covers) as cornerstones.

Why So Serious Sean Sands 47 Comments

Critical Miss: On Reviews The Wooster 124 Comments
Comments on