When players intrude on the gameplay experience of fellow gamers to make a political point, the initial response can sometimes be vitriolic. Schleiner describes being quite perturbed at some of the responses from mostly young male players, but says she's learned to see the lighter side of these interactions.

"At first I was quite upset by them, but my collaborator Brody Condon helped me see the humor in them which inspired me to post some of these emails publicly. I really like the one telling me to 'go play with my Barbie.' I also think the 'Bush is just a good guy' one is classic," she says. 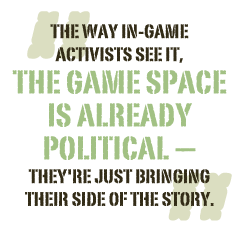 It's easy to understand why many players would be upset. In their view, activists ruin their escapism, turning what is meant to be fun into political football by bringing the problems of real life into an unreal setting. In-game activists acknowledge their work is open to criticism, but the way they see it, the game space is already political - they're just bringing their side of the story.

Conceptual artist Joseph DeLappe made headlines worldwide when he decided to use America's Army as a space to protest the war in Iraq. Disgusted with what he saw as less of a game and more of a recruiting tool, DeLappe sought to remind players of the real-world consequences of the war in Iraq by posting the names of the fallen into the game's chat system using the screen name dead-in-iraq. "This piece was the first of what became a series of critical interventions in computer games - considering these online spaces as a new type of public space," he says.

Players weren't very receptive to DeLappe's message. They criticized him for using the names of the fallen to illustrate a political point, claiming it was disrespectful to their memory. As with Schleiner, it was something DeLappe grappled with.

"I've struggled with this issue, but have come to realize, in a way through my contrarian actions, that to not do what I have done would be to dishonor these dead," he says.

DeLappe says that thanks to a low level of gore, players as young as 13 can freely play America's Army, which could have a negative impact on their understanding of war. He views his actions as a reminder to players in a sanitized environment that war has deadlier consequence than a Game Over screen.