"There has been a privatization of memory and grief in our country that has been a conscious, politically motivated tact promulgated by the Defense Department largely in reaction to the reportage on the Vietnam War," DeLappe says. "Through this work, I am symbolically taking responsibility, even ownership, of these deaths - we as tax-paying citizens are intrinsically connected to these deaths and the deaths of the many thousands of civilians in Iraq."

Schleiner and DeLappe may have found an arena ripe for political demonstrations and commentary, but surprisingly, neither of them are fundamentally against videogame violence. "I am more concerned with what starts to happen when games tell players things about how the world works and players start to take the operations of in-game simulations as givens in the real world," Schleiner says.

DeLappe views his in-game activism as a way to bring moral realism into a medium that is typically more interested in visual realism. "Consider my actions as a type of 'counter spectacle,' or that I am simply fulfilling the missing role in the game of being a conscientious objector," he says. "Maybe what I am doing is in fact a public service, an unauthorized step towards realism in the game." 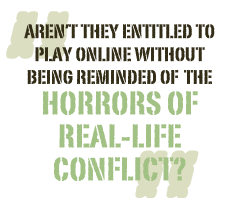 But what about the players who just like to blow off a little steam? Aren't they entitled to play online without being reminded of the horrors of real-life conflict? As more people start to game online, developers are becoming more conscious of providing a streamlined experience for everyone, which could lead to less tolerance for political griefing. "Computer gaming has been a bit of a new frontier that will undoubtedly see greater levels of control in the years to come," DeLappe says.

Schleiner sees the next political battleground in open-world sandbox games. "I do predict further struggles between developers of online games that are highly managed and their players, not just about in-game design concerns," she says. "Online sandbox games like Second Life are much more amenable to political activism than World of Warcraft."

But while both Schleiner and DeLappe agree it will become harder to introduce a political agenda into online games, that doesn't mean they're not optimistic for the future of new media activism. There are more people playing online games every day, DeLappe says, and where there is an audience, there will be people with a message.

"As an artist and activist I suspect there will be many opportunities to do my part to question, expose and redefine these experiences in the future."

James McGrath is a freelance journalist from Perth, Australia. He often doesn't kill anyone in Counter-Strike, but it's not a political thing.