You know the story: You're playing a couple of rounds of your favorite online shooter to blow off some steam after work when you're suddenly accosted by a bunch of peace-loving hippies. They're spouting things about friendship and love, spraying symbols of armistice on the map walls and tossing flashbangs at anyone with the gall to fire on their opponents. All you're trying to do is shoot your mates in the face, so why won't they let you?

They're part of a community protesting the virtual warfare in Counter-Strike the same way real-world protesters would - by generally making nuisances of themselves. The movement began when Anne-Marie Schleiner, an activist and digital media artist, noticed a disturbing trend following 9/11: Modders were beginning to give their creations an anti-Arab slant. Games like Quake and Unreal were hotbeds for the modding community at the time, and some users were modding with what Schleiner saw as malicious intent.

Schleiner describes seeing a mod during a conference in October of 2001 where players were encouraged to enter a grocery store and kill the Arabic owner. Concerned about the anti-Arab sentiment furthered by some modders, she decided to team up with fellow artist Joan Leandre, who was also at the conference, to do something about it.

Velvet-Strike was born as a way for players to download Counter-Strike sprays (custom images that players can paste onto in-game surfaces) with anti-war themes. The theory was that if players saw sprays such as "Hostages of Military Fantasy" or children's paintings on the walls, it might make one or two people think about what they were doing. In time, Velvet-Strike became part of a larger movement of peacenik players concerned by the level of realistic violence the game portrayed. 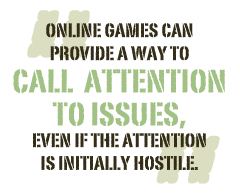 Following Velvet-Strike's lead, other activist players joined the fray. They began to cook up "intervention recipes" (a sort of protester action plan), including getting 14 like-minded people to stand in a low-lying area to form a heart. They would then spam the chat with the message "Love and Peace" and hold the position so other players could see it from higher ground. Other ideas included coaxing players into a transport ship in Tribes 2, then flying in the opposite direction of the enemy base, all the while telling players they were taking a nice, scenic tour of the area.

Schleiner says this type of protest is inevitable as real-world protests are becoming less and less prevalent. "Online games are a kind of public space that, especially in places like the United States, where suburbia has replaced live city public gathering spaces, can be a space of access and intervention, and a way to call attention to issues, even if the attention is initially hostile," she says.