Denial. Anger. Bargaining. Depression. Acceptance. The five stages of grief. Those who play enough online games, however, might consider starting the list with "login."

Griefers have become an indelible part of the online community, so numerous they swell the ranks of guilds and clans chartered with the singular purpose of harassing everybody else. More often than not, their success rings across forums in caps-locked complaints and meme-laced taunts. But griefers, despite their best efforts, can enhance the gaming experience of those whom they seek to torment.

Though trying to make other players bang their heads against their keyboards in frustration was not the main focus of my guild, it was definitely an unspoken item on the agenda. We terrorized one of the many PvP servers in World of Warcraft, dividing our time equally between questing for loot and pioneering infuriating ways to dispatch our enemies. We probed every "neutral" town for rooftop vantage points where we could snipe unsuspecting Alliance characters without provoking the computer-controlled guards. We perfected spell chains to force characters deep, deep underwater, where the ocean claimed them before they could break free. Much of what we did has since been patched into obsolescence, but remains seared in the minds of those players whose characters died outrageous and, to us, hilarious deaths. We were Vae Victus - "woe to the vanquished" - and we lived up to our name. 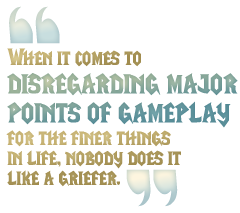 Our story begins with the Bloodsail Buccaneers, just another random group of NPC ne'er-do-wells whose sad lot is to fill experience bars and complete quests with their demise. More enterprising gamers, however, can ally themselves with these scurvy seadogs through a lengthy process of goblin genocide. This undertaking is not for everyone; specifically, those who would rather not be hated by all goblin-kind need not apply. The achievement is rendered even more dubious by the fact that the only reward for palling around with pirates was a line of quests yielding meager rewards: a pirate admiral's hat and a red parrot. Who would deliberately plaster their face on wanted posters in goblin-inhabited cities the world over for a dapper hat and a pretty bird? When it comes to disregarding major points of gameplay for the finer things in life, nobody does it like a griefer.

After hours spent exploding goblins and singing old sea shanties with our new pirate buddies, my guild and I needed a venue to show off our fresh new duds. We took a page out of the Bloodsail Captain's log and agreed that the appropriation of a worthy sea vessel would speak to both our personal M.O. and that of our swashbuckling chums. Our mark: the ship running between the Alliance ports of Theramore Isle and Menethil Harbor. Enemy characters in these zones are always open to attack, the route was essential to lower level players and a little cunning would see our guild members on the ship unmolested by NPC guards. It was the perfect plan.