Many years ago I had a friend whose girlfriend was going through a tough time. She would often call him several times a night. They'd speak for a few minutes or a few hours, depending on how badly she was feeling, until they were talked out for the night. Late one evening he hung up the phone after a particularly long conversation and trudged back to the computer room, where I was plowing through our hot-seat campaign in Shogun: Total War and doing my best to ignore the sad fragments of conversation that drifted upstairs.

He collapsed in his chair and stared blankly at the screen until my first wave of shock troops hit the enemy line. Then he said, "I've finally figured out why girls are so f**ked up." Mind you, we were 16 and fond of worldly-sounding generalizations that concealed our lack of experience.

"How's that?" I asked, ordering the heavy infantry forward. The battle was on autopilot for the next few minutes.

I laughed, but he was serious. "Think about it," he insisted. "We've all got stuff to be depressed about, but the difference is that girls don't play videogames, so they just end up thinking about it too much. You and me? We've always got this shit. We go inside Shogun or MechWarrior and nothing else even exists. No matter how bad we feel, a game makes us forget it. Most girls don't have that." 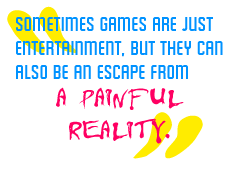 Blatant sexism aside, my friend had a point. Sometimes games are just entertainment, but they can also be an escape from a painful reality. It's one of the hobby's most powerful properties.

This escapist aspect of gaming is proving increasingly useful in medicine, where an evolving understanding of pain has led to new approaches to treatment. As it turns out, distraction and immersion are powerful weapons against pain, and employing them effectively can help solve many problems that crop up with more traditional treatments.

Pain can be as much about perception as it is about an injury or condition, something that only came into focus in the last half century. Prior to this realization, pain was generally misunderstood as "a fixed, direct-line communication system from the skin to the brain ... which imputes a direct, invariant relationship between stimulus and sensation," as Dr. Ronald Melzack and Dr. Patrick Wall characterize the old theory.

This model was unsatisfactory for a number of reasons, but it wasn't until after World War II that it really fell apart. Particularly telling were some of Dr. Henry Beecher's observations based on his experience as a wartime medical officer. In the years following the war, he noticed some discrepancies between the behaviors of his peacetime patients and those he treated during the war. Most notably, peacetime patients requested painkillers at a significantly higher rate than veterans, despite suffering similar injuries.

He theorized that the difference was one of mindset. A soldier treated in a field hospital may be seriously injured, but he is also out of the combat zone and might soon be evacuated home. On balance, he was lucky. A person who gets into a car accident on the way home from the office, on the other hand, cannot help but feel stricken by misfortune.