All of these assumptions are inaccurate and deserve to be addressed individually, but the one that irks me most is the representation of the Germans as evil without ever mentioning the Holocaust. They're simply incapable of anything good and that's that - no explanation needed. They are like the Chimera, the Locust or Doom's demons. Call of Duty says the Nazis were nothing but zombies which we are allowed to kill and mutilate without remorse. If this weren't explicit enough, World at War even includes a "Nazi Zombies" mode that lets you gun down an endless onslaught of undead Germans. 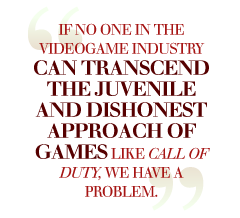 I'm not OK with this anymore. In retrospect, the only reason Miriam said it was "OK" was because she didn't want to talk about it. To casually discuss the Holocaust was unheard of in her generation, so instead of giving an honest reaction she politely excused herself without ruining our fun. Only toward the end of her life, when she was very sick and perhaps a little confused, did I hear her say anything about it. Nostalgia for a house I'd never been to. Names of relatives I'd never heard before. When she was gone, I recognized what was lost and what would soon be my responsibility. That's when I realized that if no one in the videogame industry can transcend the juvenile and dishonest approach of games like Call of Duty, we have a problem.

Nazi Zombies would not exist were it not for the horrors of the extermination camps. The unimaginable crimes committed in Auschwitz, Treblinka and their analogues is what gives us the license to openly and boldly demonize the Nazis in a way we don't the Vietcong or Iraqi insurgents. Of course, all international conflicts have a component of xenophobia, and all nations imagine their enemies as monsters so they may fight them as such. In Europe there was the greedy Jew. In Israel there is the fear of the bloodthirsty Arab. In America we excel at creating these stereotypes almost as much as we do at apologizing for them later: the savage Indian, the less than human African, the devious Japanese. Today we condemn these racial slurs. But when it comes to Nazis, apparently we're still more comfortable imagining them as anything but human.

It's not my place to argue against the way Nazis are represented in our culture and how that representation may be problematic to present-day Germany. The ghastly and hypocritical way in which Germans, Japanese and other groups are treated in these games should be addressed by their respective members. What concerns me is that in the history woven by videogames, xenophobia is all that remains. Every grain of sand on the beaches of Normandy is accounted for. Every bombed-out building in Stalingrad is documented. Every Nazi soldier is shot, stabbed and burned. But not once do we stumble upon one of the many Jewish ghettos or concentration camps just a short distance away from the next objective on our mini map. This version of history, where the Holocaust is never even mentioned, is insidious. In a period when our collective memory is fading, we cannot afford to accept revisions that leave the death camps outside the picture. Doing so undermines our efforts to preserve these events in the pages of history. It brings us closer to the day when deniers are not so easily condemned.