It's not my wish to burden developers and publishers with the task of educating their intended audience, nor do I wish to rain on the parade of fans of the genre. But if these games wish to continue using the framework of World War II without being perceived as exploitative, eventually they'll have to include more than just its superficial aspects.

I see two obvious ways to move forward. The first is to concede to the people who believe that videogames are nothing but extravagant toys incapable of tackling the same issues that other mediums do, and limit the settings of FPS games to fantasy or science fiction, where a black and white view of the world is harmless. The second would be to reexamine the setting and create something that doesn't trivialize a defining moment in human history. There will always be room for games like Wolfenstein 3D, but there is also a dire need for the plurality found in other mediums that deal with these issues.

We know that games are capable of creating meaningful experiences. Ironically, Infinity Ward's Call of Duty: Modern Warfare comes to mind. Despite the many flaws in the way it represents war, it still manages to present some profound moments, forcing the player into disturbing and thought-provoking situations in a way that only videogames can. An execution, a nuclear explosion, an interrogation; in the ridiculous "us" versus an "ambiguous but always Eastern them" context of the game the impact of these moments is diluted. But independent of the plot, they are fine examples of the potential for communicating big ideas through interaction.

I can only imagine how people would react if, for example, World at War's Nazi Zombies mode, which is essentially about a group of players that try (but inevitably fail) to hold their position against an endless stream of enemies, was put in a context that actually made sense. Make it so the players are Jewish insurgents in the Warsaw Ghetto Uprising or, God forbid, the German elderly and youth that were defending their homes in Berlin. The emotions that this gameplay elicits are already there - panic, despair, fear. It just needs to be tweaked in a way that confronts the historical realities of the setting rather than tiptoe around whatever might make us uncomfortable. 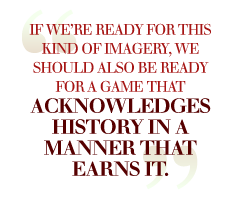 There are no invisible lines to be crossed, no new and world shattering controversies to create. Players are already taking on the role of the Wehrmacht, raising swastika-adorned flags in multiplayer matches. Players fire flamethrowers at Japanese soldiers and watch them burn in agony. If we're ready for this kind of imagery, we should also be ready for a game that acknowledges history in a manner that earns it. Because if a day comes when I walk in on my grandchildren shooting lasers at a cyborg Hitler, I won't be as polite as Miriam.

Emanuel Maiberg is a freelance writer based in San Francisco who currently covers technology and entertainment for several Israeli publications. Drop him a line at eman854[at]gmail[dot]com, or visit his blog at bergblog.com.