I looked down at my controller in disgust. Watching Jonas wipe the finger grime off his gamepad had made me acutely aware of the amount of oily buildup on my own. "You're going to get owned like a little bitch," he said, kicking the footstool where I had propped up my feet. I glared and wondered what had possessed me to come over in the first place. I didn't like Street Fighter, and I wasn't very good at it. Even more to the point, I didn't like Jonas, but it was Sunday and I was avoiding study.

Moments after the first round started, I found myself on the business end of a barrage of dragon punches and fireballs. There was no doubt in my mind that Jonas played this game way too much; there was nothing I could do that he wouldn't immediately counter or block. This lead to three short matches in which Jonas became increasingly belligerent. I stopped trying to find a tactic that would miraculously give me the upper hand and started trying to think of a strategy to remove myself from the game entirely.

"I've gotta go, man. I've got midterms soon and I have to study." I wasn't lying, but there was some dishonesty in trying to escape the savage (and monotonous) beating I was taking.

"Bullshit!" Jonas called me out.

"Look, I'll play another round. Then I'm out." This pacified Jonas for a moment. He selected Dhalsim, and I went for Chun-Li.

Surprisingly I won that first match. Jonas seemed preternaturally calm. He wasn't acting as rudely as he had been.

"How about two out of three?" Jonas swigged down some Mountain Dew and swished it around in his mouth like you might with mouthwash.

"Okay, but I still have to go soon." My surprise victory and his improved demeanor had weakened my resolve.

I breathed deeply. If I was to win this game, I would need to concentrate and play my absolute best. Jonas was also preparing - he had just stuffed a handful of Doritos into his mouth and was crunching loudly with his mouth wide open.

It was over almost before it started with almost no effort on Jonas' part. I sat there, dumbstruck. Had he tricked me into sticking around by throwing the last match? I suspected so. But I'd already lost so many times that one more wouldn't make much of a difference. 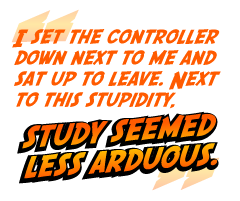 My next beating was even more swift and vicious. Jonas stood facing the screen, half dancing, half humping the TV. "Suck it, ass-licker!" he shouted. (I wasn't sure if it was directed at me or my avatar.) I set the controller down next to me and sat up to leave. Next to this stupidity, study seemed less arduous.

"Don't be mad that you got pwnd, you little fag!"

I immediately regretted the words. Jonas threw the controller at me, which stuck me square on my brow and left me reeling.

In an instant, I felt my face flush with anger. I kicked the footstool at him as hard as I could across the floor and into his shin. It hit with a dull thud, and Jonas howled. Then he leapt on me in a move that wouldn't feel out of place in a pro-wrestling arena.

"You're going to die, asshole!" he screamed.