Myra surveys her troops. The army cheers as they form a grid, rows and rows of ragtag fighters. Their clothing is torn, dirty, threadbare; their armor dull, with dying faces imprinted in their former shine.

The soldiers unsheathe their weapons and assume a ready position. Some wave their swords wildly around their heads. Some thrust their staves toward the row in front of them. Others throw oddly-sized projectiles high into the air and run in circles hoping to catch them. And a few are curled up in balls of fear, clutching their blades as though they are being forcibly taken from them.

Night falls. The moon rises demurely behind a mist. She gives the order to attack.

There is a power surge, and then a blackout.

"Goddamnit!" Myra bangs her fist on the desk. Her officemates glance at her blackened screen. Myra shifts in her seat, blows at her bangs, taps her fingers. After a minute, she turns her computer back on.

Myra's isolated cubicle is at the midpoint of a barren office, the prescribed conduit of communication. She assures quality. Her move there was a logistical strategy: to facilitate ongoing test requests, to carry out neutral research and development, to demonstrate the value-added capability of an open network between similar divisions.

Head to the harbor.

But in truth, Myra knows she's insignificant. Her placement has no purpose. Her new location only makes her more conscious of her environment. She misses the ability to close her door, to measure out the distance to her walls, to slowly rub her bare foot up and down her leg. All this comes at the expense of an open office, a constant community of efficiency, a system to massage the masses. 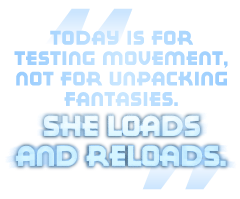 Today is for testing movement, not for unpacking fantasies. She loads and reloads. Do the physics work? Now add weather. Switch weapons. The time of day. Characters: female with child; weather: rain; weapon: wire hanger; time: high noon. Myra works fast, making up for the lost time from this morning's awful appointment. Testing is almost complete. Myra averts her eyes, only for a second.

Frustrated, she picks up her phone and dials.

"Help desk." Myra can practically smell the cigarette smoke on Peter's breath emanating from the receiver of her phone.

"You're sitting five feet away. Why are you tying up my line?"

He unsheathes his two-way radio. "Mark, status? We are swamped, I repeat, we are swamped."

Myra leans just far enough out of her cubicle to see Mark, with a badly tousled mane resulting from the uninstructed application of pomade, rolling down the hall on his office chair. He kicks the wall and sails toward Peter.

"If it's Myra, just tell her to reboot."