Myra reboots her machine. The fly lands on the flickering screen and seems to follow her cursor for a moment before lifting off again. One testing note: "The weight and size of the M202B2 rocket launcher, like carrying a small child, causes a delicate character to tilt. Dodging enemies could be catastrophic. Why one would choose a single-use anti-tank weapon while scaling up a steep mountain is another question altogether. The wire hanger is enough." Otherwise, movement in the game is adequate. Movement in reality, not so much.

Again, as with earlier, as with all day today: omphaloskepsis. Bend as far as possible. Stare straight through, straight to the empty room.

The next morning, Myra purges. Uninstall. Delete. Delete. Whole directories: delete. She runs the command line: Rm -r *. She pushes her cubicle toward the back wall. Her desk now blocks the long expanse of walkway. She explains to a superior that she is still at the midpoint, only now she has the comfort of seeing everything that takes place before her.

Myra adjusts her headphones, hidden in the expanse of curly black hair, and watches the outside one last time. Peter scuffles past, oblivious to the new arrangement. She overhears a fragment of his cell phone conversation as he passes:

"You cannot create without being able to destroy. That is the nature of machines."

As she has every day for the past five years, Myra double-clicks on her game; but this time she watches the intro movie - no skipping to the actual play. A ritual usually reserved for new games, playing the intro signifies a new beginning, a re-entry into a known world. The image before her swerves through rushing waves in an immense ocean, across dusty patches of land and into the billowy whiteness, fading from the milky blue into space, past swirling planets, crumbles of magenta asteroids, fiery stars, celestial bands of hazy colored light, to the very edge of the universe, to the blackness.

Retrodisplaced. Retroflexed. Retroverted. Incarcerated. Words thrown off, tossed aside by her doctor. Something is tilted, something needs to be removed, something is impossible, irreversible, unrestartable. No load from save, no heading to the harbor. Only destroying the anomaly. 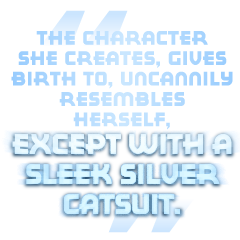 In this game, however, nothing is impossible. The character she creates, gives birth to, uncannily resembles herself, except with a sleek silver catsuit.

Her foot, bare, rubs up and down the opposite leg.

Myra whips out her flamethrower.

Over the course of three days, Myra paths over every inch of the realm, burning down the grasslands, conquering orange-stained mountains, melting snow. She obliterates planets. She memorizes where monsters spawn and destroys them upon birth.

Myra tries to sleep, to allow her brain to re-sort. She even sets up shop at work: Under her cubicle are plush blankets and a pillow. But over time, sleep becomes less essential. No need to crash. She is fine as long as her character takes time to rest.