His office was no less predictable. A sterile imitation executive desk with a thin walnut veneer, topped with a closed black laptop, a gold-finished resin lamp and an empty business card holder. A silver-framed picture of a largely forgotten family, his wife's face partially obscured by his toddler son's humongous head, next to the short particle board bookshelf pockmarked with outdated metadata manuals and management self-help books. An old office chair, back broken, for guests. She sits on the edge.

"We hear you keep a pillow underneath your desk."

"You know, we take measures to ensure that our chairs and desks are ergonomically sufficient."

"The pain is separate from my work." Myra pauses. "Do you want to fire me?"

Her superior scratches the back of his head. Weather: light snowfall. "Perhaps you should take a break every once in awhile. You may not know this, not having a family, but we've instituted a policy for family events that take place during the workday. People who choose not to acquire a family can still take advantage of that plan." Her superior lowers his voice. "After all, why give more compensation to those contributing to overpopulation?"

Myra glances at the metal picture frame. "I've considered that." 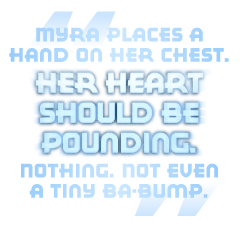 On the way back to her square sanctuary, Myra places a hand on her chest. Her heart should be pounding. Nothing. Not even a tiny ba-bump.

Three months later, Myra leans back in her chair and stares at the ceiling. Her eyes are watering, and she emits a faint glow. Something stirs inside. She is in world-building mode and can therefore create. Omnipotence trumps mere immortality.

Myra picks out a remote spot to begin her development. She creates a planet - simple enough. An aqueous planet for her aqueous humor. The monsters she generates are huge blobs of dull silver; they wander endlessly, confused by their fluidic environment and oppressed by the pull of gravity. She amuses herself by watching them eat each other.

In a week, she adds some land and applies similar rules to the various atmospheric creatures. A few tweaks to the A.I. and there is no need to exert her éminence grise; instead, she can leave monsters to exist for generations and return to see how they've evolved on their own. Do they become lonely? Godless? Do they continue to propagate without any direction from her? They do. A few more tweaks, and a single species develops a slight understanding of self. Disappointing, but acceptable. She molds civilizations with this species, watching them rise and self-destruct. She doles out small miracles for some and turns her back on others.

One week, out of sheer humor, Myra increases their proclivity toward violence, which generates wars and furthers their technological stance, thus bringing about an industrial revolution. She zooms to her current state. Closer, into her version of Olympia. She surreptitiously creates an office building. Then her office floor. A quick scan, and she finds the monsters who most resemble Peter, Mark and the rest of her coworkers, gently nudging them to find jobs over at Olympia, Inc. "What a quaint town," she whispers to them while they sleep. "What a beautiful position. What potential for efficiency."

They are easily beguiled.