She draws the familiar cubicles and takes the opportunity to push hers to the back wall. Myra blesses her avatar with free reign. The character wanders, interacts with others, but then resigns herself to her cubicle. There she sits, just like her real self, unmoving. Hours pass. She nudges the others to address her. Still, she remains motionless.

On a whim, concerned about her well-being, suddenly self-aware, Myra tries to find her pulse. She fingers her wrist, her thumb, her neck, any pressure point. She feels her upper left chest. Nothing. She holds her breath. A minute passes, an hour, and still she sits and does not move.

"Maybe I need to go outside." Myra staggers toward the elevator bank. Down button. How primitive, she thinks.

"Maybe I'll watch the sunset," she tells the security guard. He glances up with his mouth slightly open, not registering what she has said. His eyes wander the room before returning to his desk.

Myra walks for a few miles in the light rain, hit by a bout of nostalgia for the godless years, and roams the network of streets, ending on the bridge to the nearest inlet. North and west and straight on until morning, she instructs herself. Eventually, she reaches Percival Landing, among the mess of boats floating on the dusky blue, almost bumping, their thin poles and wires reduced to lines and angles, lines and angles to be calculated. She progresses to the edge of the nearest pier and squeezes her eyes as the sun nears the Puget Sound. 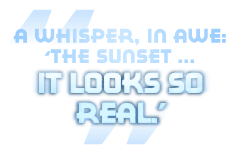 Hours pass. Myra stands, and the paschal full moon hovers, out of focus. For a moment, she sees crevices and cracks on the moon's surface, but her vision becomes hazy. She rubs her eyes and looks, harder, craning her neck a bit. Myra sees the same details again, but beyond that, a tremor. A squint, and the satellite is nothing more than a milky white roundness. Some sort of bug, she thinks. Focus, Myra, focus. Eyes widen; pupils dilate. Now that the moon mass is firmly in place, she can almost feel the textures of the cinereal terrain.

Her moment of clarity, she knows, will only last a few seconds longer than the previous insight, so she scans quickly for signs of a moonquake. She does not move, even with the systoles, even with her strong need to push through. A superior conjunction forms between the earth, Myra and the moon.

She thinks if she stares long enough the moon will come permanently, and the camera view will zoom in, onward toward space, into the shadowy expanse. There, with her silvered arms, she will hold the moon together and cease its rumbling. As if in a pause reset eternal, Myra stands, gazing, waiting for the moon to come into focus.

Jennifer Estaris is a writer and game designer. She has not had a computer or internet connection at home for the last five months (and counting).