Susie arched her left eyebrow and curled one corner of her mouth. It was a unique expression that Dan knew well; it had taken about three months of married life for him to crack it. The expression meant Susie disapproved of something he did, but was too nice to mention it directly.

Susie tightened Dan's purple-and-blue-striped tie. "You sure you want to go with this one?"

Luck was something Dan needed a great deal today: He was going in for his final interview for a Senior Designer position at the legendary games studio, Explosive.

Already he was nervous; in a mere few hours, he'd be in the hot seat. He had worked in the industry since he had finished college, but always for fairly small development studios. Nothing like Explosive. Explosive was one of the biggest dogs on the block.

He took a final glance in the bathroom mirror, took his coat, took one more little kiss from Susie and headed off to meet his destiny.

Driving down the I-280, Dan's mind was a mess of thoughts. Bills (hydro, medical therapy for his bum back, a wedding gift for his friend Bill). His last job (Enterprise Studios. Company went bankrupt after releasing an unmitigated trash heap of an MMORPG that had more bugs than Master of Orion III). His Toyota Tercel (needs a new transmission). 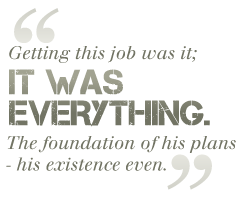 He had too much riding on this interview. Getting this job was it; it was everything. The foundation of his plans - his existence even. If he succeeded at his final interview, everything would be fine. If not - well, Dan realized as he navigated an onramp, he would be quite simply, irrevocably and completely, royally screwed.

"Well, that just about sums it up," Cindy Sanders, Executive Producer, said in her high-pitched, pixie-like voice.

"Really? That's it?" Dan asked reflexively. His grip of the armrests of his chair tightened, and his mouth felt a bit dry. It was almost over!

"There is just one more thing, Dan," Cindy said, leaning over the desk a little.

"Oh?" Dan exhaled half a lungful of air. "One more thing?" he asked.

The interview - so far - had gone exceptionally well, Dan thought. Every question Cindy Sanders set up, Dan handled smoothly, responding with an astute comment here, a candid, self-effacing admission there all delivered with an unrehearsed, natural-sounding (but decidedly fake) aplomb. Beneath a thick layer of nervousness in some dusty corner of his psyche, Dan even felt the twinges and tugs of a newborn nugget of confidence.

At least until that "one more thing" popped up.