I hear the words, and it feels like a shot to the gut: "I have no respect for people who teach in a game program who haven't worked in the industry." I happen to be standing next to just such a person: my friend Jason, a professor at a four-year school in California. We're at a conference talking to Scott, an industry friend of mine. In an instant, I'm overcome by empathy, embarrassment and a desire to make the conversation magically end by any means possible.

"I don't know," I offer, "I think the balance is critical. I wouldn't feel the same way about any other form of art or media. Just because someone hasn't sold their paintings commercially doesn't mean they're any less of a painter. Plus, I think the perspective is good." I specifically recall a couple of art historians who turned me on to the works of Jackson Pollock and Gerhard Richter. I have no idea if they could have created what they taught. It never occurred to me to ask.

We go back and forth for a bit, but the conversation is clearly uncomfortable for Jason, and so we leave. Industry goes its way and academia another. It is, I think, an unfortunate parting.

As we walk away, I tell Jason of a conversation I had at the Montreal Game Summit shortly after I entered academia. I'm having dinner with friends, when one says, "Oh my goodness, you're a professor now." She pauses to take it in, then corrects herself: "No, you're a game developer who teaches." It was a subtle difference, but to her, it made all the difference in the world. 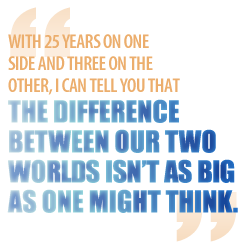 With 25 years on one side and three on the other, I can tell you that the difference between our two worlds isn't as big as one might think, and the delineations between "practicing" and "preaching" are not as important as they often seem. There is value to each side of the equation. There is also great value in there being no equation, no sides at all.

It's 2006. After 25 years in the game industry, I am again looking for a gig while facing a company in the mid-to-late stages of combustion. An advertisement from the Savannah College of Art and Design is on the top of the morning's list. It is the first time that I consider the possibility of doing something else, something other than game development, a job I have been doing since I was 15 years old.

The first step in the whole process hinges on my academic credentials. "I have 21 shipped titles," I say. Though this collection impresses every other company at which I interview, it doesn't seem to be the key selling point here. It never occurs to me that my education, earned in a previous lifetime, could have a bearing on my present job-worthiness. "Many of them won awards," I add. It matters, but it doesn't.