A student came to my office last week and asked for help setting up a LAN game of Civ IV in one of the college's computer labs. He was going to play my Age of Conquest mod scenario with some friends that afternoon. While I showed him in the menu how to set up a multiplayer game, he shared his strategy to play Spain and attack the Aztecs. It's a bad idea.

Most people think Cortés was able to defeat Montezuma because of superior weaponry and technology. At best, that's an oversimplification. The Aztecs were far more advanced than most people realize, and their population numbers were astounding for the time period. The capital of Tenochtitlan had an estimated 250,000 people - five times the population of the largest cities in Europe at the time.

Cortés was able to conquer the Aztecs because of two factors that aren't present in the game. The first was disease. The second was Montezuma's belief that the appearance of Cortés was a sign that marked the beginning of the Aztec Empire's doom. Without the benefit of these factors, my student and his Spanish civilization would face a crushing defeat and lose the chance to gain a foothold in the Americas.

I know this because I spent almost six weeks researching Europe and Central America in the time of Columbus to create the scenario for a class called "Empire." Population numbers for all major cities in Europe and Central America, major educational and cultural centers on each continent, diplomatic, technological and military strengths and weaknesses of the time are all represented in the mod and cited in the readme file.

For the class, students had to play the game in addition to their readings and discuss whether the scenario accurately represented the period. One of the key concepts students should have learned about was the role of belief systems as described in the book "The Conquest of America: The Question of the Other." In essence, the book and the game make the same argument: Had the Aztecs viewed the world differently, their clash with the Spanish conquistadors would have been radically different. 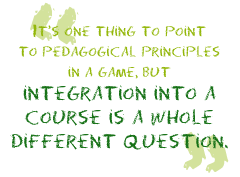 Employing videogames in the curriculum at Dickinson College is a relatively recent development. It was only a few years ago when I began reading academics such as James Paul Gee, Henry Jenkins and Bryan Alexander who discuss the teaching potential of games.

Even then, we were slow to adopt. It's one thing to point to pedagogical principles in a game, but integration into a course is a whole different question. Most computer games take hours to learn and even longer to play through. To justify such an investment in time, a game would not only have to match the content of the course, but provide a learning experience that couldn't be accomplished through reading, writing and class discussion.

Secrets of the Guild Robert Rath 41 Comments
Comments on