Even before MC Frontalot coined the term "nerdcore" almost a decade ago to describe his own distinct flavor of hip hop, geeky rappers have busted out rhymes about videogames, AD&D, hacking, Star Wars, Lord of the Rings, computer culture and an array of other unabashedly nerdy subjects. As this singular hip hop scene continues to develop and gain momentum, it's not surprising to find an increasing number of references to videogames and gamer culture woven throughout the lyrics and beats of many rappers who rally under the nerdcore banner.

In the chorus of his World of Warcraft-inspired track "Level Up," wordsmith ZeaLouS1 spits rhymes touting his WoW devotion over a foundation of heavy beats and the looped intro from Wizards and Warriors ("I level up my druid when I'm playin' World of Warcraft / Stompin' anybody steppin' close to my warpath / It got serious, I'm passin' up booty / So I can finish the quest 'cause that is my duty"). Covering similar subject matter from a slightly different angle, Nursehella's song "Lv 99" lets her croon seductively about how MMOGs and Super Famicom-emulated RPGs turn her on ("Roleplaying games are how you tease me / You keep my RPG-spot primed / Tantalizing tantric action / I'm pushing Level 99").

On his latest album Rolling Doubles, Beefy rhymes (among other things) about his tabletop and videogame obsessions. His track "Play With Me" deals with social awkwardness ("I was playing Super Smash Bros. when it was prom night / The last girl I saw was Chinese, she beat me in a street fight) and geeky love ("Met you at a LAN party in my buddy's garage / I was feeling quiet, large, the opposite of in-charge / Social butterfly until a pretty stranger walks by / Asking me if 'you need a CD-KEY for Far Cry?'"). 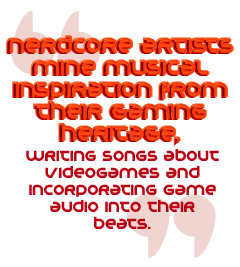 These rappers are certainly not alone in their affection for gaming. Numerous other nerdcore artists mine musical inspiration from their gaming heritage, writing songs about videogames and incorporating game audio into their beats. In turn, they're finding a welcome audience among fellow geeks and gamers alike.

When he's not working as a seventh-grade teacher, Raheem Jarboe makes hip hop under the name Random. During his youth, hip hop and videogames served as crucial means of escape from the terrible realities of inner-city life, he says. "I think my mom got me an NES to keep me inside the house and away from the elements that were in my neighborhood. All the kids from the block would come over and we would play games until the wee hours of the night. This was back in the '80s, and now 20 years later we still do the same thing."

On the Come Up Pat M. 0 Comments

Letters to the Editor: Gin, Juice, and Videogames The Escapist Staff 0 Comments