I wasn't sure what to say when my mom came home from church and asked if I had a game called Doom. Of course I did. I had Doom, and so did all of my friends. Every week, we'd get together, network our computers and have a blast. As I sat there, though, put on the spot, memories of an earlier period of my life when I played another favorite weekly game with my friends flashed through my mind. I remembered the heated argument over why I wasn't allowed to play Dungeons and Dragons anymore and started to panic.

She'd heard from a friend - who'd heard from a friend - that some kids had gotten into a lot of trouble playing Dungeons and Dragons and wanted to make sure I had nothing to do with it. Unfortunately, nothing I could do or say would dissuade my mother from believing that Dungeons and Dragons was an evil game - and that was that. The case was closed. Now, somehow, my mom had found out about this terrible new threat to her children and had come to question me about it. My heart raced and my mouth went dry. I felt my favorite pastime was lingering in jeopardy - everything I loved would hinge on the answer to the question at hand. Should I lie? Should I feign ignorance? If I told her the truth, she might flip out and take my games away. On the other hand, there really wasn't much she could do. As long as I had my own computer, I could do whatever I wanted. I decided that honesty would be the best policy. "Yeah, I've got Doom. Why do you ask?"

"Well," she said, "the pastor was wondering if you would let him borrow it." 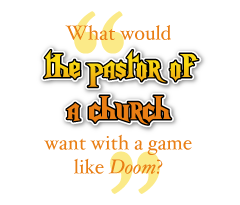 Wait, what? Suddenly, there was a new dimension to this whole thing. What would the pastor of a church want with a game like Doom? This all seemed incredibly fishy, but I had to know, so I asked her, "Why?"

She shrugged her shoulders and said, "I don't know. I guess he wants to play it. In fact, some of the other guys from church were talking about taking their laptops over to his house. You could probably join them if you run over right now."

Her reply nearly knocked me out of my chair. Who wanted to borrow what, now? Obviously, I hadn't heard her correctly and needed clarification. "The pastor, you said?"

"He wants to play a game about going into Hell and shooting a cybernetic Satan in the face?"

No, it didn't. It didn't sound like him at all. There was no way the pastor of my church was inviting me over to his house for a death match with "some of the guys." Was this a trick? It had to be a trick. This was obviously some kind of intervention. Yes, that had to be it. I was about to undergo an intervention to break my video game addiction.