But it wasn't. The truth was, my pastor was a cold-blooded killer. In his free time, he enjoyed hunting men down and murdering them where they stood - at least, within the confines of a video game.

I had often heard the phrase "paradigm shift" but I had never experienced one until now. While the idea seemed odd at first, over time I came to realize that, of course, the pastor of a church can also be a gamer. Ronald Andrae, one such example, looks like any other guy you'd bump into on the street - tall, thin and clean-shaven. He is married with children and is the associate pastor of a church he helped found a few years ago. He's a calm, charismatic man who likes to speak his mind, but never in a heavy-handed, authoritarian manner. He's the kind of guy anyone can get along with and seems like the last person who would enjoy a violent video game. Yet he admits that he enjoys killing Nazis in Call of Duty on his PC. Hunting down friends in a round of death match? Yeah, he's been there, he's done that. What's more, he's not alone. He is just one of many pastors I've met who enjoy playing games in their spare time - and all of them love to win.

Pastor Andrae is only a few years older than I am and, like most other pastors and youth ministers his age, he grew up with video games. He remembers the arcades and early days of home console gaming. He shares stories about playing games into the wee hours of the morning and we talk eagerly about new releases and advancements in technology. The latest hardware, the big news at E3 - it's just like talking to any other gamer. I never hear phrases like "murder simulator" used to describe games. There's no hype, no "talk show rhetoric" being thrown around about any of this. The words I hear the most are "fun" and "cool," and he means them. He just shakes his head when I talk about articles I've read and the statements made by certain outspoken individuals on the evils of video games. 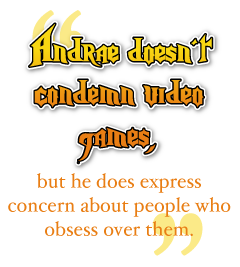 On Sunday morning, however, it's all business. He's dressed up, standing behind the podium, preaching The Word and telling us all how to live better lives in the eyes of God. He doesn't condemn video games, but he does express concern about people who obsess over them. His chief concern, however, isn't about graphic violence at all.

"I don't understand why they have to swear so much in these games," he says as we throw old, weather-worn tiles into a barrel. It's a beautiful Saturday, and we're at my parents' house where he volunteered to help fix the roof. For the wage of coffee and ham barbecue, we're cleaning up the yard and dodging falling debris as the roofers throw bits of tile and wood down to be disposed of.