His moral objection to profanity reminds me for a moment that this man really is a preacher, and not just some guy off the street. It reminds me that it's his job to object to some of these things, and despite his love for video games, he puts God first. He may have grown up with video games but he doesn't live for them. He lives for God.

If you've never thought of a pastor as the type of guy who'd be into video games, then chances are you've never met one like Ronald Andrae. This is at the heart of the most recent paradigm shift we're all going through: more and more people are becoming gamers every day. People of widely varying backgrounds and beliefs are all coming together to play video games on their cellphones, home consoles and even in the few remaining arcades. Like most of them, the Reverend and I seem to come from completely different worlds, yet we maintain a common point of view regarding video games. 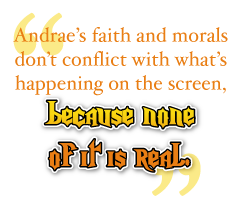 It's been said that the heat around video games - their use as a scapegoat for all of society's ills - will dissipate as future generations who understand video games replace the generations that either can't or won't. We've seen this happen throughout history and indeed, it's already happening again in pastors like Ronald Andrae who believe that the root of the problem lies elsewhere. His faith and morals don't conflict with what's happening on the screen, because none of it is real. Hunting down his friends and murdering them in cold blood is all just part of the fun.

In retrospect, I should have found it hard to believe that any of this would be a surprise. Men of God are, after all, just men. They're entitled to a little rest and relaxation, and if that means indulging in some online combat from time to time, so be it. Far from what we have come to expect and quite contrary to popular belief, these people are out there. They really do exist. So, the next time you find yourself face-to-face with a stone-cold killer on a server late at night, check out your local church. The man at the podium may just be the man with the gun.

Dale Culp is a freelance writer and correspondent for TheWeekender.com and also blogs for LoadingReality.com

DOOM Review - Nostalgia for the Present ffronw 19 Comments
Comments on