The intersection between video games and Christianity occurs once you realize that a video game's ability to communicate with a person is not confined to just its cut-scenes and characters. You can use the actual interactions in the game and the consequences of the player's actions to communicate a value system to a person. However, only placing dogma, scripture, or prayer in a game generally renders those things meaningless. Christianity can best be communicated through games by engaging the player in the morals of the text. 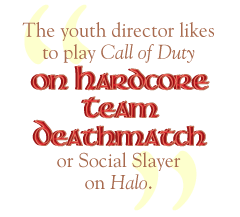 To offer an opinion on how a game could do this, I exchanged a few e-mails with the Youth Director of Grace Episcopal Church, Mac Brown, in Charleston, South Carolina. He taught courses in religion for middle to high school students before working with Grace Church and will begin his training to become a priest once he finishes his current duties. Make no mistake, Mac is a serious gamer who mostly prefers Xbox Live and FPS games. He likes to play Call of Duty 4 on Hardcore Team Deathmatch or Social Slayer on Halo 3. Based on his personal experience, Mac often incorporates both video and moral games into his youth group sessions: A typical church lock-in or mid-week meeting will incorporate games like Halo 3, Wii Sports and Guitar Hero.

When asked, Mac is dismissive about the idea of teaching religion directly through a video game. "What do we mean by religion? Are we trying to impart certain dogmatic practices and procedures, or should the goal be to teach underlying morals and values," he asks, pointing out that in Christianity, Jesus gives only a few of the former, but teaches plenty of values and morals. Attempting to communicate dogma instead of morality is where most religious games run into problems.

An example of a game that tries to shove dogmatic doctrine on the player is Left Behind: Eternal Forces. The game is set in a post-Rapture setting where the player helps fight the war against the Anti-Christ's forces while converting non-believers. The primary criticism levied at the game is that the murder of non-believers could be forgiven through the game design. One protester argues, "The idea that you could pray, and the deleterious effects of one's foul deeds would simply be wiped away, is a horrible thing to be teaching Christian young people." The game encourages the notion of prayer as a way for forgiveness of sins, yet it completely falls apart because there is no real sense of guilt or sin being communicated. In the game, the mechanic blandly boils down to "Prayer fixes your health". The concept of prayer as a redemptive or meditative act, thus implying that the player's character is indeed guilty or has sinned in some way, is never approached.

Movies and TV: 6 Reasons the Left Behind Books Suck (And Why the Movie Might, Too) Phil Owen 32 Comments