Canada, wrote noted author and professor Hugh MacLennan, is a land of two solitudes. He was speaking of the wide and sometimes intractable chasm that separates the nation's founding English and French cultures, but his words would be equally apt in describing a more contemporary but still uniquely Canadian dichotomy: how a nation can be lauded as a world leader in videogame development and simultaneously castigated for its reluctance to protect that industry with aggressive intellectual property law enforcement.

The videogame industry in Canada is the third largest in the world, trailing only those of the United States and Japan - a truly remarkable fact when you consider that the country's entire population is roughly the same as that of the metropolitan area of Tokyo. Electronic Arts maintains two studios in the country, including its largest worldwide facility at EA Canada. Ubisoft has based its own flagship studio on the other side of the country, in Montreal. Rockstar maintains studios in Toronto and Vancouver, and you also may have heard of a little Edmonton-based outfit named BioWare. Independent developers like Digital Extremes, Silicon Knights, Ironclad Games and Hothead Games also flourish. In all, the Canadian videogame industry employs roughly 14,000 people across the country. 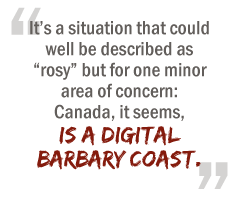 The games industry in Canada is one of the most vibrant in the world, and governments at all levels have seen its value and taken bold steps to encourage and support it. Canadian gamers are doing their bit, too, dropping $1.5 billion on hardware and software in 2007 and then ratcheting it up to $2.2 billion in 2008. All in all, it's a situation that could well be described as "rosy" but for one minor area of concern: Canada, it seems, is a digital Barbary Coast.

"The United States continues to have serious concerns with Canada's failure to accede to and implement the WIPO Internet Treaties, which Canada signed in 1997," said the Office of the U.S. Trade Representative in its 2009 Special 301 Report, which saw Canada added to a "priority watch list" of nations with inadequate intellectual property law enforcement that includes China, Russia, Indonesia and Pakistan. "We urge Canada to enact legislation in the near term to strengthen its copyright laws and implement these treaties. The United States also continues to urge Canada to improve its IPR enforcement system to enable authorities to take effective action against the trade in counterfeit and pirated products within Canada, as well as curb the volume of infringing products transshipped and transiting through Canada."