When it comes to game development in Vancouver, it all starts with Don Mattrick.

In 1982, Mattrick was just a teenage programmer in a Vancouver suburb dabbling in game design with his friend Jeff Sember. He couldn't have known he was beginning a career that would bring him to the top spot of the world's biggest entertainment software publisher. He'd never have guessed that he would go on to hold an absurdly long title like "Senior Vice President of the Interactive Entertainment Business in the Entertainment and Devices Division" of Microsoft, or hang out with Steven Spielberg on stage at E3, debuting a movement recognition device that could alter the way people interact with technology. And on a more local level, it's unlikely he foresaw how those early programming sessions would form the basis for a city-wide industry that would turn Vancouver into one of the world's foremost game-development centers and his colleagues into the people responsible for some of gaming's greatest hits. 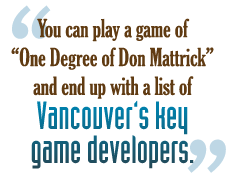 You can play a game of "One Degree of Don Mattrick" and end up with a list of Vancouver's key game developers. Mattrick and Sember's company, Distinctive Software, became EA Canada, home of most of EA's sports franchises and the Need for Speed series, among many other titles. Ex-Distinctive employees founded Radical Entertainment, Relic Entertainment, Black Box Games, Gas Powered Games and Backbone Entertainment. Companies formed in the past few years like BigPark, Hothead Games and United Front Games can trace their roots back more than 20 years to Distinctive.

The seed was planted 27 years ago when Mattrick and Sember released Evolution. It was an arcade-style game for various computer systems in which each of the game's six levels represented a different rung on the evolutionary ladder, from amoeba to beaver (How can you tell it was made in Canada, eh?) to laser-gun-toting human. Mattrick was just 17, but he and Sember got their game into the hands of Tarrnie Williams, the owner of a local enterprise software company called Sydney Development Corp. Initially reluctant, Williams agreed to publish the game after witnessing his 10-year-old son's enjoyment of the demo copy. (Just to prove how interrelated Vancouver's development scene is, that kid was Tarrnie Williams, Jr., who is now the General Manager of Relic after producing hits like Warhammer 40,000: Dawn of War and Company of Heroes, plus the Medal of Honor series and NBA Live franchise while working at EA.)

What started out as a side-project for Mattrick while he attended university soon became a full-time job. Though his elders advised him to give up on videogames and pursue a career in law instead, Mattrick stuck with his passion. He and Sember turned Evolution's success into a long list of high-profile titles during the 1980s and early 1990s like Hardball II, Power at Sea, 4-D Boxing and a number of licensed games including The Simpsons: Bart's House of Weirdness, Teenage Mutant Ninja Turtles: Manhattan Missions and Top Gun: Danger Zone. In particular, the small studio found a niche in racing games like Test Drive, its sequel The Duel, Bill Elliott's NASCAR Challenge and Stunts.